After completing the investigation of a fatal crash in the Pennsylvania Turnpike’s Lehigh Tunnel in February 2018, the U.S. National Transportation Safety Board has recently issued two safety recommendations to the Federal Highway Administration.

In the Highway Accident Brief, the NTSB detailed its investigative findings regarding the failure of an overhead electrical conduit support system and the subsequent trailer-tractor crash.

On Feb. 21, 2018, truck driver Howard M. Sexton, of East Greenwich, New Jersey, died after a crash where a length of conduit fell from the ceiling of the Lehigh Tunnel and struck him in the head. Only Sexton’s truck was involved in the accident; no other injuries were reported. 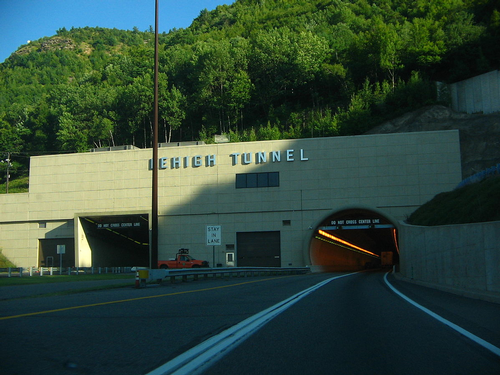 Route 82, CC BY-SA 3.0, via Wikimedia Commons
After completing the investigation of a fatal crash in the Pennsylvania Turnpike’s Lehigh Tunnel in February 2018, the U.S. National Transportation Safety Board has recently issued two safety recommendations to the Federal Highway Administration.

According to the NTSB, Sexton was traveling southbound on I-495—the Northeast Extension of the Pennsylvania Turnpike—around 6 p.m. that day when a 10-foot stretch of metal conduit broke free from its steel support and fell, hitting the windshield of his truck.

The truck continued through the tunnel for more than half a mile before coming to a rest at the side of the road.

The NTSB accident report explains that a 2016 inspection of the tunnel found corrosion on some of the steel straps keeping the conduit affixed to the tunnel ceiling. The preliminary report does not specify a probable cause, but the summary focuses on the corrosion that had been found on the part that ultimately failed and caused the wreck.

The Pennsylvania Turnpike Commission was already in the process of issuing a contract for the replacement of the lighting and electrical system for the tunnel, a job that would involve moving the conduit from its current location to the sides of the tunnels. Work was slated to be completed later that year in October.

In May, a preliminary report from the National Transportation Safety Board revealed that the fatal accident was likely caused by the corrosion of the steel straps holding up the electrical conduit.

Five days after the crash, NTSB and FHWA investigators examined portions of the conduit and suspension system throughout the tunnel.

Since completing the investigation, officials found multiple areas experiencing corrosion, fracturing or even missing transverse conduit supports. Specifically, in the area of the crash, nine transverse support struts failed, for a total collapsed length of roughly 60 feet (including the 10-foot section that impacted the truck).

NTSB adds that damage to the conduit support system in this section appeared to include preexisting damage and damage caused by the collision.

In further examination, the NTSB Materials Laboratory found that PVC coatings near the anchor rod holes and at cut ends of the support struts were comprised, likely due to being cut from longer sections, disturbing the protective PVC coating. The general pattern of corrosion at the cut ends, however, indicated disbanded PVC coatings or no coatings at all, leading to the accelerated corrosion of exposed metal surfaces.

By the end of the report, NTSB concluded that electrical conduit support system in Lehigh Tunnel no. 2 likely failed due to the fracture of extensively corroded PVC-coated steel support struts, allowing the electrical conduit to drop into the path of the oncoming truck.

As a result of the investigation’s findings, the NTSB has issued two safety recommendations to the FHWA.

“The National Tunnel Inspection Standards implemented by the Federal Highway Administration are essential for tunnel safety and the findings of this crash can be used to improve the guidance the standards provide to tunnel owners,” said Robert Molloy, Director of the Office of Highway Safety at the NTSB.

The first of the recommendations requests that FHWA make a notification to tunnel owners of the circumstances of the Lehigh Tunnel crash, with an emphasis on the importance of inspecting, documenting and properly repairing significant corrosion in nonstructural elements above roadways.

The second suggests that the FHWA revise its Tunnel Operations, Maintenance, Inspection and Evaluation Manual, Specifications for the National Tunnel Inventory, and inspection training courses. NTSB adds that these revisions should further classify the possibility of significant corrosion in nonstructural tunnel elements, such as overhead electrical distribution systems, and that these findings are critical, requiring immediate action.

The formal Highway Accident Brief 20-04 and related recommendations can be read in their entirety online.