The transition is being conducted in collaboration with New Fortress Energy and GE Power.

Situated on 1,660 acres in Monroe Country, Ohio, and Wetzel County, West Virginia, the Long Ridge Energy Terminal is noted to have three primary lines of business that are operational or in development, including power generation, natural gas liquids storage and transloading and frac sand transloading. 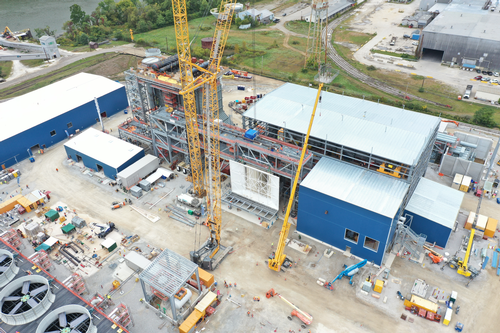 In terms of infrastructure, Long Ridge claims to offer its customers:

In its latest endeavors, Long Ridge announced its plans to provide carbon-free power to customers as early as November 2021 by blending hydrogen in the gas stream and transition the plant to be capable of burning 100% green hydrogen over the next decade.

According to reports, the project will be the first purpose-built hydrogen-burning plant in the United States and the first worldwide to blend hydrogen in a GE H-class gas turbine.

At the time of the announcement, Long Ridge reports that it has engaged engineering firm Black & Veatch (Overland Park, Kansas) to assist with developing plans for the plant integration for hydrogen blending and to ensure safe and reliable industrial practices.

Using the GE 7HA.02 combustion turbine, the plant will ba able to burn between 15-20% hydrogen by volume in the gas stream intially, but will have the capability to transition to 100% hydrogen over time.

“Long Ridge has many advantages in the pursuit of green hydrogen and zero-carbon power and this partnership allows us to get firsthand knowledge and experience blending hydrogen and natural gas in GE turbines,” said Wes Edens, CEO and Chairman of New Fortress Energy. “Our singular focus has been to identify and support clean technologies that can eventually produce hydrogen at commercially attractive prices. As we continue to make progress in our efforts and advance proof of concept projects, this experience will bring tremendous value.”

Once the plant has transitioned, Long Ridge notes that it has access to nearby industrial byproduct hydrogen for initial testing, in addition to access to water from the Ohio River when the production of green hydrogen with electrolysis intends to begin. Over time, below ground salt formations will also be able to be used for large-scale hydrogen storage.

“We are thrilled to work with the Long Ridge and New Fortress Energy teams on this first-of-its kind GE HA-powered project that will drive a cleaner energy future by utilizing hydrogen to ultimately produce carbon-free power,” said Scott Strazik, CEO of GE Gas Power. “As one of the leaders in decarbonization in the gas turbine industry and the OEM with the most fleet experience in using alternative low heating value fuels including hydrogen, we look forward to applying more than 80 years of experience to help Long Ridge achieve its goal of providing reliable, affordable, and lower-carbon power to its customers.”

Following commercial operations, which are slated to begin in November 2021, the plant hopes to be capable of supporting a balanced and diverse power generation portfolio from energy storage capable of accommodating seasonal fluctuations from renewable energy, to cost effective, dispatchable intermediate and baseload power.

While financial terms revolving around the plant transition have not been disclosed, the parties are reportedly working together to finalize the terms of their commercial agreements.