American transportation technology company Virgin Hyperloop has recently announced that after years of testing and developing hyperloop technology at its full-scale test site in North Las Vegas, it will be building its Hyperloop Certification Center in West Virginia.

“Today is one of the most exciting days in Virgin Hyperloop’s history,” said Sir Richard Branson, Founder of the Virgin Group. “The Hyperloop Certification Center is the start of the hyperloop journey for West Virginia, for the United States, and for the world. We’re one step closer to making hyperloop travel a reality for people everywhere.”

Since the reveal of the hyperloop concept was presented by Elon Musk, founder of Tesla, Paypal and SpaceX, the race for creating the high-speed transit was on. The transportation system makes use of a depressurized cylinder made up of a series of steel tubes through which levitating cylindrical passenger (or freight) pods travel at high speeds on a cushion of air. 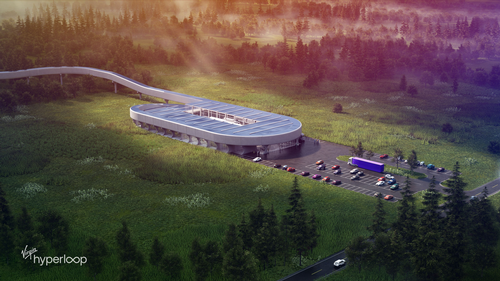 Photos/Video: Virgin Hyperloop
American transportation technology company Virgin Hyperloop has recently announced that after years of testing and developing hyperloop technology at their full-scale test site in North Las Vegas, it will be building its Hyperloop Certification Center in West Virginia.

In 2016, Bjarke Ingels Group unveiled a sneak-peak of what would be the Hyperloop One (now known as Virgin Hyperloop One) system, connecting Dubai to Abu Dhabi in the United Arab Emirates. This project was slated to be complete in 2020.

While hyperloop competitor Hyperloop Transportation Technologies would announce its own endeavors throughout the years, in the summer of 2018 Virgin Hyperloop announced that it had entered into a partnership with the Mid-Ohio Regional Planning Commission to study the options of building a hyperloop connecting Pittsburgh, Columbus and Chicago.

In 2019, Pennsylvania Turnpike Commission approved a $2 million contract with Los Angeles-based engineering and construction firm AECOM for a hyperloop study on the potential project.

Completed in May of this year, the study revealed that in 30-years-time the hyperloop connecting the three cities would create $300 billion in overall economic benefits and would reduce CO2 emissions by 2.4 million tons.

According to a press release by Virgin Hyperloop One at the time, the feasibility study covering technical and commercial issues was confirmed through analyzing route alignments, comparative costs, engineering complexity, public right of ways, environmental constraints, ridership volumes and travel behavior.

Additionally, in 2019, Virgin Hyperloop was named as one of the original project proponents for the development of another hyperloop public infrastructure project in western India. Virgin, working in collaboration with global ports owner DP World, was chosen to spearhead the project. Both Mumbai and Pune, which are roughly 100 miles apart and would be connected by the project.

In April, international research firm, Lux Research Inc. (Boston), issued a report, “Analyzing the Technical Barriers to Realizing the Hyperloop,” claiming that the first passenger-carrying high-speed Hyperloop projects shouldn’t be expected to open until 2040—at the earliest.

However, officials from Virgin and the Mid-Ohio Regional Planning Commission, report that its project in the U.S., as well as its plans for Mumbai, India, are predicted to be complete before 2030.

“By 2025 to 2030, we want hyperloop operating somewhere in the world,” Ryan Kelly, Virgin’s Head of Marketing and Communications, said at the time. “We still feel very bullish that 2040 isn’t going to be the number.”

Currently, Virgin Hyperloop is the only company in the world that has successfully tested hyperloop technology at scale, launching the first new mode of mass transportation in over 100 years.

According to the company, Virgin has “successfully operated a full-scale hyperloop vehicle using electric propulsion and electromagnetic levitation under near-vacuum conditions, realizing a fundamentally new form of transportation that is faster, safer, cheaper, and more sustainable than existing modes.”

Virgin adds that before the company breaks ground in India, it hopes to establish a government test facility in the U.S. to set industry standards and ease the regulation process first. The project is expected to cost several hundred million dollars and create several hundred jobs. While a location for the project is still being decided, the company believes the facility could be completed by 2025.

According to a press release issued by Virgin Hyperloop, the HCC project builds off of the current progress being made on the regulatory front in the U.S. In July, the Secretary of the U.S. Department or Transportation, Elaine Chao and the Non-Traditional and Emerging Transportation Technology (NETT) Council unveiled a guidance document, outlining a regulatory framework for hyperloop in America.

The historic announcement not only provides a pathway for hyperloop regulation and deployment in the U.S., but also establishes hyperloop’s eligibility for federal funding for projects. According to Virgin, the federal momentum, paired with the advancements of the HCC, will pave the way for the certification of hyperloop systems and are the first steps towards commercial projects.

“Particularly as we look to emerge from the COVID-19 crisis, it’s clear that we need a 21st century solution that will propel us forward, allowing us to not just rebuild, but actually evolve.” said Jay Walder, CEO of Virgin Hyperloop. “Hyperloop is that solution, and we look forward to working with our partners across the country—in places like West Virginia, Ohio, Texas, Missouri, Washington, and North Carolina—to connect the country from coast to coast.”

In the company release, Virgin reports that not only will the HCC progress the industry in regulatory and commercial fronts, it also plans to create an entirely new ecosystem and will create thousands of new jobs across construction, manufacturing, operations and high-tech sectors.

Slated to be built on an 800-acre site spanning Tucker and Grant counties, the $500 million certification center will include a welcome center, testing facilities, a training center on operations, maintenance and safety, a manufacturing facility, and six-mile-long certification track. Danish architectural firm, Bjarke Ingels Group has been selected to design the HCC.

The project site was formally a coal mine, donated to the West Virginia University Foundation, in partnership with Virgin, by Huntington-based Western Pocahontas Properties.

Construction of the center, which is partnered with WVU, Marshall University and others, is expected to begin in 2021. Virgin Hyperloop aims to achieve safety certification by 2025, with commercial operations beginning in 2030. The nascent technology is expected to run at 600 miles per hour or faster.

WVU's Bureau of Business and Economic Research predicts the center will have an economic impact of $48 million annually.