According to United States Customs and Border Protection officials, the Trump administration is considering having more than 80 miles of the U.S.-Mexico border wall painted black.

The potentially 82-mile-long stretch of wall is located in the Rio Grande Valley and Laredo, Texas. 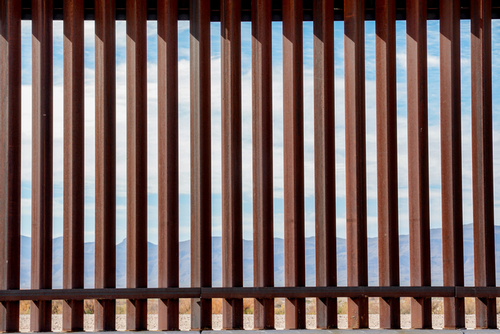 grandriver / Getty Images
According to United States Customs and Border Protection officials, the Trump administration is considering having more than 80 miles of the U.S.-Mexico border wall painted black.

In June, the Ninth Circuit Court of Appeals ruled that Trump wouldn’t be permitted to divert $2.5 billion of military funds to the construction of the wall, as the action was considered an attempt by the president to skirt Congress.

Even though the funds were transferred under a declaration of national emergency, Chief Judge Sidney R. Thomas penned the ruling, proclaiming that the action was a violation of the Appropriations Clause and therefore considered “unlawful.”

Most recently, last month, the U.S. Court of Appeals for the District of Columbia reversed a lower court’s dismissal of House of Democrats’ lawsuit challenging the Trump administration’s authority to use Defense Department funds for construction of the U.S.-Mexico border wall.

Starting back in May, the Trump Administration held a border wall project meeting at the White House regarding the potential design change. At the time of the meeting, Trump officially gave senior adviser Jared Kushner and associated aides the order to seek cost estimates for coating the border wall.

CBP is considering painting more than 80 miles of border wall black, a move in line with President Donald Trump's push to paint barriers that could cost tens of millions of dollars extra ... latest w/ @priscialva https://t.co/lnQjTERWzf

Reportedly, Trump insisted that the dark color will enhance the border wall’s “forbidding appearance” and will make the steel too hot to touch during summer months, discouraging climbers.

In researching cost estimates, Trump has specifically named Fisher Sand and Gravel to provide input on the matter and hopes a solution will be reached for either a “flat black” or “matte black” coating because of its heat-absorbent properties. According to current government contracting estimates, the design change could inflate costs by $500 million or more.

However, Rick Duncan, a materials engineer who specializes in rooftop coatings claimed that painting the infrastructure black would only increase its ability to retain heat by less than 10%, a number that would decrease as the paint began to fade from exposure.

As reported by The Washington Post, coating the border wall was previously left out of the original U.S. Customs and Border Protection design specifications due to the president’s fluctuation on the matter, in addition to military commanders and border officials expressing that a coatings application was unnecessary, costly and would require long-term maintenance.

Currently, the border is being constructed using weather-resistant steel, which is slated to have a 30-year service life, despite exposure to intense solar radiation and extreme temperature changes. However, those same elements are reported to quickly oxidize the metal into an orange hue, creating an issue for painters. Other potential issues for the project include coating sections that have already been set in concrete and how crews would paint the Mexico side of the border with limited space.

Another potential issue is in regards the coating job's cheapest reported option: The application of two coats of black acrylic paint is slated to cost $1.2 million per mile if completed by private contractors. According to reports, acrylic paint would be impossible to color-match and would clearly reveal welds, patches and other forms of scarring in the infrastructure.

Other, more expensive, options for the potential painting project as suggested by government estimates include a military-grade epoxy coating known as System 21. While the midrange coating is reported to be highly resistant to abrasion, rust and is amenable to welding, the minimum cost per mile is $4.5 million. The most expensive coating option—slated to cost $6.8 million per mile to apply—would involve applying a black powder coating system.

While Trump has previously voiced his desire to paint border wall barriers, the administration is now considering the coating of up to 82 miles of border wall in Texas.

Earlier this year, U.S. Customers and Border Protection officials were reported to be testing the black coating along some sections of the U.S.-Mexico border in an effort to assess the operational benefits.

Previously, Trump pushed for the black coating as a means to enhance the infrastructure’s “forbidding appearance” and heat properties, ultimately discouraging climbers, however, now CBP officials say the coatings are being considered as a means to provide contrast against the landscape.

Additionally, the project has also been reported to have existing contracts with the option in the contract to paint if decided upon.

The administration is currently pressing forward with its goal to build 450 miles of border wall by the end of this year. According to CBP officials, that goal is on track with most of the work involving the replacement of old, dilapidated wall with a new system. Construction crews are reportedly building between 10 and 12 miles of border wall per week.