According to reports, despite the ongoing COVID-19 pandemic, U.S. Navy ship days delayed by maintenance were reduced by 80% in fiscal 2020.

Additionally, just last week, the Navy released its Force Structure and Shipbuilding Plans, which include project background and anticipated issues for Congress.

During a webinar of the Virtual Fleet Maintenance & Modernization Symposium of the American Society of Naval Engineers on Sept. 15, Rear Adm. Eric Ver Hage, commander, Regional Maintenance Center, said, “The needle is really moving, and moving in a good direction,” in regard to the Navy’s 2020 delay reduction.

“It’s not just about on time, it’s also getting the required work complete. In our 2020 DDG [guided-missile destroyer] availabilities, we are tracking to complete 99% of all of our mandatory technical requirements, the things required to keep a ship operating to its full expected life cycle. That also is an improvement over last year.”

Ver Hage added that fiscal 2020 has been a much busier year compared to previous endeavors, with 50 chief of naval operations availabilities and another 100 in planning; roughly 700 emergent availabilities; 157 ship readiness assessments; 20,000 intermediate-level tasks; and 25,000 technical assists. 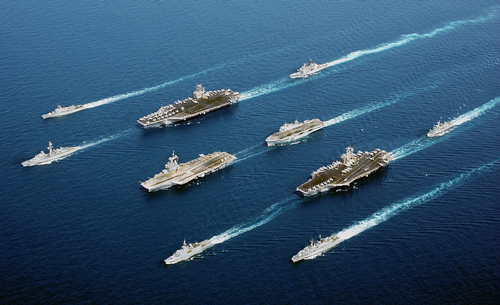 U.S. Navy/PH3 Alta I. Cutler, public domain, via Wikimedia Commons
According to reports, despite the ongoing COVID-19 pandemic, U.S. Navy ship days delayed by maintenance were reduced by 80% in fiscal 2020.

According to Ver Hage, the accomplishments were the result of “a great team effort,” while noting that “there has been steadily improving collaboration between industry and the government.”

In May of this year, the government entity reported that it had begun exploring the use of a new digital software to help combat shipboard repairs and maintenance services.

To create a digital twin, Aerial Alchemy—an unmanned aerial systems company that the Naval Surface Warfare Center in Port Hueneme, California, signed a Cooperative Research and Development Agreement with in June 2018—first worked to define the appropriate amount of remote-sensing technologies that would be needed to design a purpose-built unmanned aerial system. According to reports, Aerial used LiDAR and hyperspectral imaging, which is able to analyze information collected from across an electromagnetic spectrum.

On Thursday (Sept. 24), the Navy submitted its “Navy Force Structure and Shipbuilding Plans: Background and Issues for Congress” document, proposing its fiscal year 2021 budget requests and plans for maintaining a fleet of 355 ships of certain types and numbers. (The maintenance plan was released in December 2016 and was made U.S. policy by Section 1025 of the FY2018 National Defense Authorization Act (H.R. 2810/P.L. 115-91 of Dec. 12, 2017.)

In the document, the Navy has requested a total of roughly $19.9 billion for its shipbuilding account to for the procurement of seven new ships in FY2021, and 42 new ships over the course of the five-year shipbuilding plan. While previously the Navy proposed FY2021 budget requests the procurement of eight new ships in 2021 and 44 through 2025, the LPD-31—an LPD-17 Flight II amphibious ship that Congress procured in FY2020—and an LHA amphibious assault ship has since been excluded.

A full report on the plans can be viewed here.