The government entity is currently preparing an Environmental Impact Statement for the project.

Although documents and maps on the proposed project were published at the beginning of the month, the Navy has been planning to update its Hawaiian shipyards for some time.

In 2018, the USNI News reported that the Navy maintenance leadership planned to bring two reports to Congress: a mandatory document on optimizing naval shipyards and a secondary report on investments in private shipyards. According to the Government Accountability Office, it was estimated at the time that the state of the four shipyards—Norfolk, Pearl Harbor, Portsmouth and Puget Sound— were in “poor condition” and had accumulated a $4.86 billion backlog of work. 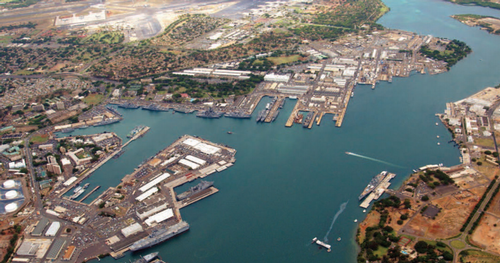 The average age of Navy drydocks is 89 years, according to the GAO, and many of the facilities are ill-equipped to handle modern (and often larger) ships. Several of the Navy’s facilities require buoyancy assistance in order to move submarines into the drydock; one at Puget Sound, the GAO says, can only move Los Angeles-class subs “after they have had several tons of weight removed and only during a high tide.”

While the four naval shipyards have been subject to maintenance and occasional renovations over the years, there has not been a cohesive strategy for their upkeep.

At the time, the notice of the report arrived as the Navy and the Defense Department under President Donald J. Trump worked to ramp up to a 355-ship fleet. Trump made expanding the Navy a promise during his campaign and reiterated his hopes for the fleet after his inauguration. Former Secretary of the Navy Ray Mabus laid out a plan to expand in a report in December 2016, at the end of his tenure.

Although the secondary report on private shipyard capacity is not mandated by Congress, it did fall in line with the Navy’s reported strategy of offering maintenance work to smaller private shipyards as it looked to increase fleet size.

According to the Navy’s Notice of Intent, the EIS will evaluate the potential environmental effects associated with the construction and operation of a graving submarine dry dock replacement and waterfront production facility at the Pearl Harbor Naval Shipyard and Intermediate Maintenance Facility at Joint Base Pearl Harbor-Hickam in Oahu, Hawaii.

The construction plans to include permanent ancillary facilities—including power and various utilities—a new electrical substation, a new dock for loading and unloading dredging materials, a temporary concrete batch plant and demolition. Additionally, in replacing the dry dock with a graving or excavated dry dock, the structure will be built using concrete on land, near the shore.

Chuck Anthony, a spokesperson for Joint Base Pearl Harbor-Hickam, reported that there is currently no cost estimate for the project at this time.

The public scoping process will be open until Oct. 13 and will accept comments regarding the project’s potential effects to historic properties protected under the National Historic Preservation Act. In addition to the public documents and maps, the Navy has also provided two web-based platforms on the project: a Virtual Open House and a Virtual Scoping Meeting slated for Sept. 29 from 4:30-6 p.m., local time.