Winners have been chosen for the “Reimagining the Brooklyn Bridge” project, launched by New York City Council, along with urban-design nonprofit the Van Alen Institute.

In July, VAI announced six finalists out of 250 entries, the designs of which ranged from glass walkways, to microforests to even a ban on cars altogether.

The thought for a contest was prompted by the uptick in foot and bike traffic on the bridge. According to a 2017 report by the NYC Department of Transportation, between 2008 and 2015, on the weekends, foot traffic nearly quadrupled and cyclist traffic more than doubled. 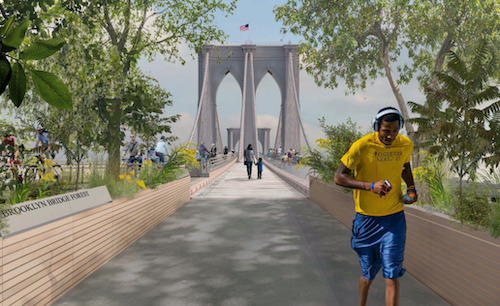 Images courtesy of the Van Alen Institute
The winner in the Professional category was the Brooklyn Bridge Forest, which reimagines the bridge “as an icon of climate action and social equity, improving mobility while respecting the landmark structure.”

Contest jurors chose the shortlist from two categories of entrants: young adults, who were encouraged to suggest ideas based on their “wildest dreams,” and professionals age 22 and older.

A winner for each category will be decided by scores from the jury and an online public vote.

Jurors favored inclusive designs, according to Deborah Marton, Executive Director of the Van Alen Institute, but the panel also chose “ambitious” designs. The finalists were as follows.

In the Professionals category:

In the Young Adults category:

“The competition’s finalists were selected by an interdisciplinary jury representing a wide-ranging set of perspectives on the Brooklyn Bridge,” VAI said. “The jury considered the following factors: team composition; accessibility and safety; environmental benefit and security; respect for the bridge’s landmark status; feasibility; and ‘magic’—i.e. new ideas that surprise, delight and fascinate.”

This design reimagines the bridge “as an icon of climate action and social equity, improving mobility while respecting the landmark structure.” In this plan, the wooden walkway is expanded using planks sustainably sourced from a “partner forest” community in Guatemala that protects a 200,000-acre rainforest. A bike path and reclaimed traffic lane create new space for cyclists and low-carbon transit, while “microforests” at either end of the bridge bring nature to New York City and serve as green spaces for underserved communities.

The team consisted of architects, a landscape architect, an urbanist, two ecologists, a structural engineer, a forester and environmental lawyer, educators and researchers and a community engagement facilitator.

Young Adult Winner: Do Look Down

This design includes an installation of a glass surface above the bridge’s girders to “create a whimsical new pedestrian space activated through art installations and seasonal programming.” In this plan, the lower roadway is converted into additional walkable and human-powered transport space that also offers opportunities for local vendors and performers. Powered by kinetic paving, an LED and projection system is mobilized to honor the city’s cultures, histories and identities.

The team includes Shannon Hui, a junior at Barnard College studying architecture and psychology; Kwans Kim, a freshman at the NYU Gallatin School with interests in film, music and television; and Yujin Kim, who completed his B.A. in Mathematics at Columbia University and is currently a PhD candidate at the Courant Institute of Mathematical Sciences, NYU.