Amtrak Behind, Over Budget on NY Hall Project

A new report from Amtrak has revealed that its part of New York’s Moynihan Train Hall project is delayed and over budget, and will likely not open by the project’s initial deadline of December.

The project began with a rocky start, as both New York’s Metropolitan Transportation Authority and state officials accused Amtrak of planning to redevelop sections of Penn Station without input from other parties in spring 2018.

A spokesperson for Amtrak expressed confusion over the accusation at the time as Amtrak was already set to leave Penn Station to make its new home the James A. Farley Post Office building, also known as Moynihan Station. 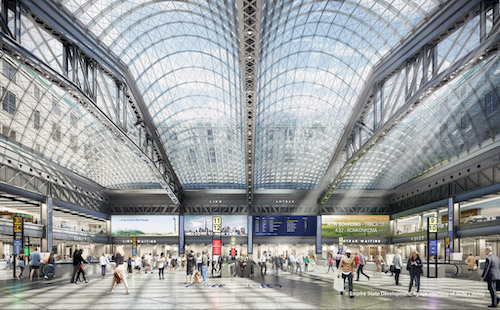 Empire State Development
A new report from Amtrak has revealed that its part of New York’s Moynihan Train Hall project is delayed and over budget, and will likely not open by the project’s initial deadline of December.

MTA President Patrick Foye and Empire State Development Corporation President Howard Zemsky said in a joint statement at the time that they had learned of Amtrak’s plan to entrust a private party with the development of the station, which would’ve went against plans to transform Penn Station.

Amtrak spokesperson Christina Leeds responded by expressing Amtrak’s confusion regarding the matter, citing that the company had recently met with ESD, Long Island Rail Road and MTA staff to collaborate on ways to improve the station, which includes “seeking a world-class facilities operator for our concourse."

That move, though, might not happen until the first quarter of 2021.

Amtrak said that certain functions that might not be online by December include passenger information displays or other station operations, which might not be available until March of next year.

The company attributes the delays and costs to “lack of oversight and insufficient experiences from staff.”

“We have previously reported on the company’s challenges delivering large, complex programs on time and within budget and recommended that the company incorporate best practices into its company-wide program management oversight policies and procedures,” according to the report.

“The company has taken significant steps to remedy early program management deficiencies on the Moynihan program. It did not, however, take these actions soon enough to avoid cost increases and ensure that it can complete its entire station relocation by the scheduled opening date at the end of 2020. These ongoing cost and schedule risks are the result of ineffective executive oversight coupled with inexperienced staff during the program’s first two years, and a failure to follow the company’s program management standards.”

As recently as June (with only six months left in the initial schedule) Amtrak says that the program team did not have reliable planning or management.

A spokesperson for Gov. Andrew Cuomo noted, however, that the Amtrak part of the project is only about a tenth of the entire scope, and even if Amtrak isn’t done on time, the hall will open by the end of the year.

“Amtrak’s project is a subcomponent of the larger train hall, representing less than ten percent of the overall project, and it would be a mistake to draw broad-based conclusions from this narrowly-focused report,” said Eric Gertler, CEO-Designate of Empire State Development.

“The Moynihan Train Hall will be complete by the end of this year, on budget and ahead of schedule, and Amtrak leadership have assured us they will meet that timeline. Once completed, it will provide New Yorkers with the modern transit hub they deserve, while honoring the legacy of the original Penn Station. From the Kosciuszko Bridge to the Albany Airport to the new Rochester Rail Station, this administration has a history of delivering major infrastructure projects on time and on budget—and after 30 years of delays, we will do the same at Moynihan Train Hall.”