The world’s longest 3D-printed concrete bridge was officially named late last month by Guinness World Records in Shanghai’s Baoshan district. The bridge was built last year by a team from the Tsinghua University School of Architecture.

The 26.3-meter-long, 3.6-meter-wide, concrete bridge was completed Jan. 12, 2019, in the Wisdom Bay Industrial Park. The project was designed and developed by a team under professor Xu Weiguo and was jointly built with the Shanghai Wisdom Bay Investment Management Company. 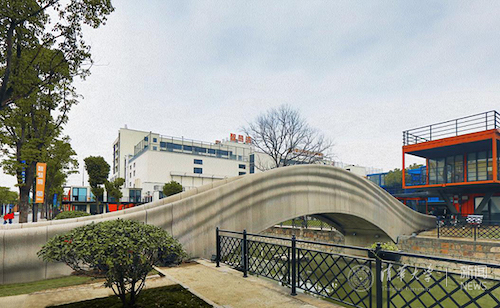 The bridge’s design structure is modeled after the ancient Anji Bridge in Zhaoxian, China, and adopts a single arch. The distance between abutments in 14.4 meters. According to the university, before the printing process began, a 1:4 scale physical model was built to carry out the structure failure testing, which proved the bridge’s strength can meet the load requirements of holding pedestrians crowding over the whole bridge.

The printing used a concrete system developed by the Tsinghua team.

“There are three main innovation points of the system, taking the leading position in this field internationally,” the university said. “The first is the printing tool of the robot arm, which avoids plugging in extrusion process and collapse during the material’s layer stacking. For the print path generation and operating system, it integrates form design, print path generation, material pumping, printing tool’s movement, robot arm movement and other systems to work together. The third is a unique printing material formula, which has reasonable performance and stable rheology.”

All of the components of the bridge were printed in 450 hours (about 19 days). (The 1,400-year-old Anji Bridge, took more than 10 years to build.) The printing materials of these components are all composite materials composed of polyethylene fiber concrete with various admixtures.

The bridge is also embedded with real-time monitoring systems, which include vibrating wire stress sensors and high-precision strain monitoring.