In an effort to secure funding to remedy the cracks found on the West Seattle Bridge (whether that be a permanent fix or a whole replacement), Seattle Mayor Jenny Durkan has declared the situation a “civil emergency.”

The announcement, which was made last week, is also a means to accelerate the process in general by allowing the project to skip some regulations surrounding competitive bidding, budget limits or employment of temporary workers.

In late March, the Seattle Department of Transportation issued an emergency bridge closure on the high-rise portion of the West Seattle Bridge after discovering that previously inspected concrete cracks along the midspan had accelerated at a rapid and unanticipated rate. 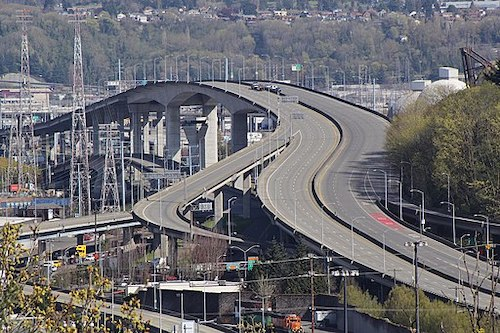 Sounder Bruce, CC-SA 4.0, via Wikimedia Commons
In an effort to secure funding to remedy the cracks found on the West Seattle Bridge (whether that be a permanent fix or a whole replacement), Seattle Mayor Jenny Durkan has declared the situation a “civil emergency.”

In Phase 2, Kraemer plans to add temporary external structures—otherwise known as “shoring”—and will determine the third phase if long-term repairs are feasible.

The two advisory boards are slated to play important, complementary roles in the city’s collective effort to push ahead with the best path for the high rise bridge, in addition to mitigating the impacts of the closure on West Seattle, the Duwamish Valley and surrounding communities.

Last month, SDOT issued a request for Statements of Qualifications from engineering firms to design a replacement for the bridge, the estimate for which is estimated between $50 million and $150 million.

If awarded, the engineering team would oversee both the possible demolition of the West Seattle Bridge and construction of the new infrastructure. The repairs or full replacement would have to be capable of serving roughly 125,000 daily travelers and be able to withstand a “2,500-year event” due to its location next to the east-west Seattle fault.

Work began on a temporary fix for the bridge earlier this month, which is including wrapping sections with carbon fiber reinforced polymer (CFRP) and installing post-tensioning tendons.

SDOT detailed a multi-step plan for the emergency shoring that begins with reopening more than 100 traveler holes that were filled following the original construction.

Shortly after the temporary fixes began, the Task Force raised concerns about funding, saying that either option—replacing or repairing—will likely exceed the city’s financial means.

At that time, SDOT said it was looking into funds in relation to the Federal-Aid Highway Program as well as grant programs from the United States Department of Transportation. In addition to that, funding could be supplemented with bonds, property taxes, gas taxes, parking taxes or tolls.

Durkan’s emergency declaration should make those options more flexible; though, first, the city needs to determine which course of action it plans to take.

The bridge’s task force recently released a statement saying it believes repairs are feasible on the bridge, but didn’t get into specifics such as if lane usage would be reduced, what a price tag would look like or how such repairs would impact the bridge’s seismic resilience.

The situation was even used by Rep. Pramila Jayapal, D-Washington, in support of a $1.5 trillion proposed infrastructure bill on the House floor.

“Repairs and possible replacement will cost hundreds of millions of dollars, and the people that live in that part of my district, very populated, have no way to get out of that, except from one little place on the south end of that area,” she said.