More than four years ago, Rep. Marcy Kaptur (D-Ohio) was reportedly working with various Ohio-based transit firms, lobbyists and transportation businesses to decide on a best practice location for the installation of a hyperloop track. 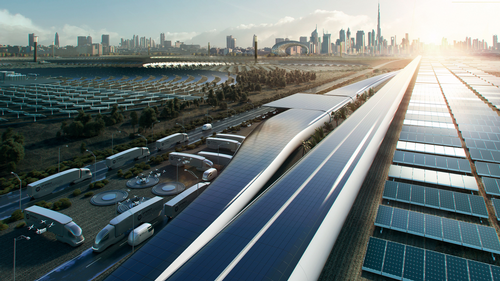 By February 2018, HTT reported that it had entered into an agreement with the Illinois Department of Transportation and the NOACA to study the possibility of a Hyperloop system between Chicago and Cleveland, marking the first such agreement involving parties from multiple states.

HTT said it has previously formed regional consortiums of “other prominent organizations” around the idea of building a Hyperloop system in the Midwest.

"We came here because places like Cleveland, Chicago and Pittsburgh have the manufacturing, the raw materials and the talented, hard-working people in order to make it happen," said Andrea La Mendola, HTT’s Chief Global Operations Officer, at the time. "We can source everything from this area. This is a place where you make big things."

HTT also noted that the month prior the company had been working with Congressional representatives from Illinois and Ohio, as well as Pennsylvania and Wisconsin, to ask President Donald J. Trump for federal support for Hyperloop development.

In September 2019, the Richard King Mellon Foundation donated $100,000 to the NOACA, causing the agency to look into connecting Pittsburgh to the proposed Great Lakes Hyperloop System.

After various private meetings, a feasibility study was slated to be released in December, with community meetings scheduled to be conducted in January for public comment.

“Once the study is completed, NOACA and partners will pursue an environmental impact statement followed by the construction of the project,” said NOACA Executive Director Grace Gallucci. “This project is years—not decades—away from becoming a reality.”

Pittsburgh Post-Gazette reported at the time that the study would cost $1.3 million and would be split between NOACA and HTT.

At the end of May, MORPC released the released of results of its Midwest Connect study, revealing that in 30-years-time the hyperloop connecting Chicago, Columbus and Pittsburgh would create $300 billion in overall economic benefits and would reduce CO2 emissions by 2.4 million tons.

“Hyperloop is fundamentally about more than just getting from A to B quickly,” said Jay Walder, CEO of Virgin Hyperloop One.

“It’s about the enormous benefits—the economic uplift, the job creation, the emission reductions and the opportunity to fundamentally change the way people live and work. We’re proud to be working with MORPC to continue advancing a hyperloop route in the Midwest.”

The results weren’t far off from predictions made last year, estimating that a one-way trip from Pittsburgh to Chicago would take just under an hour and cost about $93.

“We have continued to advance the work along this corridor ever since winning the Virgin Hyperloop One Global Challenge in 2017 and conducting this feasibility study was one of our first, major action steps,” said Thea Ewing, Transportation & Infrastructure Development Director at MORPC.

“The main takeaway is that hyperloop technology is, indeed, feasible along this route.”

Hyperloop History and Other Projects

The Hyperloop concept originated with inventor Elon Musk, who then made the basic plan “open source,” a practice borrowed from the software world, in which a plan or set of code is opened up to the public for further development. That opened the door to HTT and its prime competitor, Hyperloop One (now known as Virgin Hyperloop One), to begin work on bringing the idea to life.

Similar to the Great Lakes Hyperloop System, in the summer of 2018, the Mid-Ohio Regional Planning Commission announced a partnership with Virgin Hyperloop One, to study the options of building a hyperloop connecting Pittsburgh, Columbus and Chicago.

Since the reveal and feasibility study agreement with NOACA and the Illinois DOT, however, HTT has also reported progress on projects in two countries: a track set to be built in Abu Dhabi, and the company’s third test track, under construction in France.

According to CNBC, the 10-kilometer (6.2-mile) Abu Dhabi Hyperloop line will be developed close on the border of the Abu Dhabi and Dubai emirates, and will be completed in several phases.

The France-based track will also be built in phases and will include a closed 320-meter (1,079-foot) system and a 1-kilometer-long system, elevated to 5.8 meters in height by pylons. The track was slated for completion by 2019.

In March, Pennsylvania Turnpike Commission approved a $2 million contract with Los Angeles-based engineering and construction firm AECOM for a hyperloop study. The study looked at the possibility of constructing a hyperloop that would connect Philadelphia, Harrisburg and Pittsburgh, with a leg to Wilkes-Barre/Scranton.

By July, the government of Maharashtra, located in India, announced that the development of a hyperloop is a public infrastructure project, and has named Virgin Hyperloop One has one of the original project proponents.

Virgin, working in collaboration with global ports owner DP World, will spearhead the project. Both Mumbai and Pune, which are roughly 100 miles apart and would be connected by the project, are located in western India.

In October, Beijing-based architecture firm MAD Architects announced a collaboration project with HTT for a new elevated transport system design. The two previously collaborated for the 2020 Expo in Dubai. In taking the next steps, the team plans to integrate its full-scale passenger capsule for human trials in 2020.

Most recently, in April, international research firm, Lux Research Inc. (Boston), issued a report, “Analyzing the Technical Barriers to Realizing the Hyperloop,” claiming that the first passenger-carrying high-speed Hyperloop projects shouldn’t be expected to open until 2040—at the earliest.

However, developers working on the Midwest Connect track disagree with the study’s findings.

While most hyperloop developers envision commercialization of high-speed transit by 2030, researchers from Lux claim that the prediction is too optimistic.

The reason? Lux says, “While the Hyperloop concept is technically feasible, it will require significant development to become cost-effective. As proposed Hyperloop projects are seeing increasingly large estimates in cost per mile, and key variables in operating costs are unknown, Hyperloop projects are a long way from proving economic feasibility.”

Additionally, the lack of government-certified testing, support, regulations, and even the challenge of decarbonization, could also lead to development delays.

On the contrary, the Post-Gazette pointed out at the time of the Lux’s study release that the current COVID-19 pandemic and economic downturn could also push for a quicker implementation of hyperloop projects, as they promote non-polluting forms of transportation.

“We think we’ll be in a period where we’ll see an acceleration in public infrastructure projects,” Rob Miller, Chief Marketing Officer for HTT said. “We see it really as an opportunity. We’re ready.”