YInMn Blue Available for Commercial Use

High-performance pigment manufacturer The Shepherd Color Company announced last week that the pigment known as “YInMn Blue” has been added to the U.S. Environmental Protection Agency’s Toxic Substance Control Act Registry, which means the blue hue is now fully approved for commercial and artistic use.

Besides the tone’s artistic use because of its pigment, YInMn Blue is also valued for its durability and IR reflectivity.

YInMn Blue, named so because of its elemental makeup, which includes yttrium, indium and manganese, was first discovered by accident by Oregon State chemist Mas Subramanian in 2009. Besides the color’s vibrant hue, its reflectivity—which could help keep structures cool and energy-efficient—is being touted.

Earlier this year, as part of its “Cool Roofs Initiative,” Shepherd tested YInMn Blue’s infrared reflective properties at its Laboratory for Advanced Innovative Research, near Denver.

Using two house models, researchers used a standard dark blue—made with high durability pigments—for one small, metal-paneled roof, and a coating of YInMn Blue on another. Both models were placed outside on a sunny, warm day. 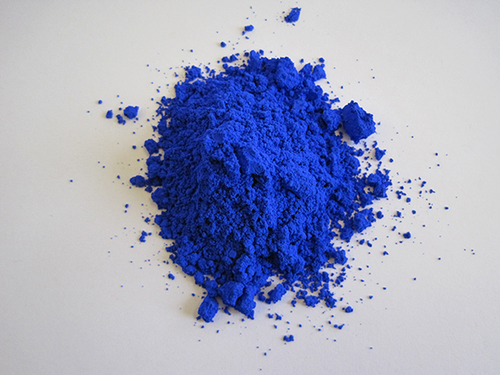 According to Sheperd, YInMn’s high temperature calcination production process makes the color technology highly inert, meaning that it can be used in a variety of coatings and plastics while retaining weathering properties. YinMn Blue is infrared-reflective, but is also extremely opaque in the UV and visible parts of the solar spectrum, according to the company.

Commercially known as Blue 01G513, the EPA approved the pigment for industrial use in the fall of 2017.

“High-performance coatings and engineering plastics companies have been impressed with its visual opacity and color and the near-infrared reflective properties,” Shepherd said in a statement.

“This balance of visual aesthetics and infrared functionality gives it unique properties that allow building products to have deep, rich blue colors and that stay cooler when exposed to the sun. Blue 10G513 also has exhibited excellent weathering properties.”

Earlier this year, Subramanian announced that he and his team were looking at new ways to design more pigments that are stable, durable, non-toxic and vivid—a combination that he says is hard to achieve.

“If I hadn’t come from an industry research background—DuPont has a division that developed pigments, and obviously they are used in paint and many other things—I would not have known this was highly unusual, a discovery with strong commercial potential,” Subramanian said at the time.

Most blue pigments are unstable; they easily fade, and are made of toxic materials. But Subramanian realized a pigment synthesized at such a high temperature would be stable.

“Most pigments are discovered by chance,” Subramanian said. “The reason is because the origin of the color of a material depends not only on the chemical composition, but also on the intricate arrangement of atoms in the crystal structure. So, someone has to make the material first, then study its crystal structure thoroughly to explain the color.”

For instance, before YinMn Blue, the last blue discovery was cobalt aluminum oxide-based blue or “Cobalt Blue,” which is still widely used today. The production of Cobalt Blue, however, required a lot of cobalt ion, which can be hazardous to both humans and the environment.

Therefore, Subramanian is looking at research on hibonite-based blue pigments.

Hibonite-based pigments are more thermally stable than Cobalt Blue due to its higher preparation temperature and ability to remain unaltered structurally and optically upon exposure to strong acid and alkali, according to the university.