3D-Printed Concrete Developed for Offshore Use

“One of the current materials used to manufacture anchors for floating wind turbines is steel,” said Pablo Zavattieri, a professor in Purdue’s Lyles School of Civil Engineering. “However, finished steel structures are much more expensive than concrete.”

The work is being funded by the National Science Foundation INTERN program.

According to the university, traditional building methods of wind turbines are expensive, often requiring parts to be shipped roughly 30 miles or more away from the coast. As a replacement to steel materials, researchers are looking at how these same parts can instead be created using 3D-printed concrete.

While the possible solution is reported to be more cost efficient, 3D printing the necessary parts would also allow them to float to a site from an onshore plant and would eliminate the use of molds required in conventional concrete manufacturing methods.

The new development is a continuation of the team’s research on 3D-printing cement-based materials into bioinspired designs, such as ones that use structures mimicking the ability of an arthropod shell to withstand pressure. However, in addition to creating 3D-printed wind turbine towers, RCAM and FWTC are also looking into the possibility of printing anchors. 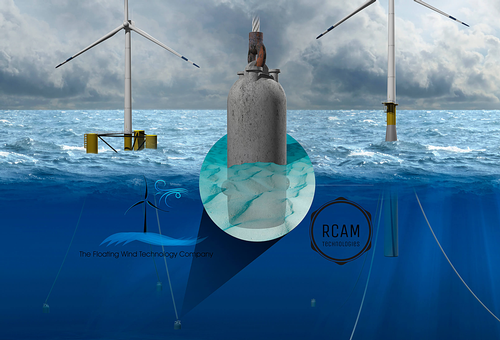 “Purdue’s world-class capabilities and facilities will help us develop these products for offshore products for the U.S. Great Lakes, coastal and international markets,” said Jason Cotrell, CEO of RCAM Technologies. “Our industry also needs universities such as Purdue to provide the top-quality university students for our workforce needs for these cutting-edge technologies.”

Currently, the team is looking at how a robot arm could be integrated with a concrete pump to fabricate the wind turbine substructures and anchors. The university reports that this is process involves “scaling up their 3D printing by formulating a special concrete—using a mixture of cement, sand and aggregates, and chemical admixtures to control shape stability when concrete is still in a fresh state.”

From there, the team can begin to understand the feasibility and structural behavior of 3D-printed concrete produced on a larger scale. Through this progressive understanding, the team will then be able to determine how gravity affects the durability of the larger structures, and can be used to optimize and reinforce other 3D-printed structures in general.

“Printing geometric patterns within the structure and being able to arrange the filaments through or playing around with distribution of the steel are both possibilities we have considered for optimizing and reinforcing the structures,” said Jan Olek, Purdue’s James H. and Carol H. Cure Professor of Civil Engineering.

Research is being conducted in the Robert L. and Terry L. Bowen Laboratory for Large-Scale Civil Engineering Research.

In September 2018, Lancaster University students Nicolas Orellana and Yaseen Noorani announced that they had developed O-Wind, an omnidirectional wind turbine that works in large urban centers.

Tall buildings found in cities contribute to chaotic wind patterns. The 25-centimeter-wide prototype O-Wind turbine seizes this opportunity, using the gusts to generate energy. Those who live in these areas can attach the turbine to their balcony or the side of the building.

The current prototype has vents cut into the surface that allow for the wind to be captured from all directions, which spins a sphere similar to the way a globe is spun. This activity powers a generator, the energy from which can be put into the grid or used directly.

The following year in July, the FLOTANT project delved into a plastic-concrete hybrid system that could help improve offshore wind turbine buoyancy. The FLOTANT project began back in April, and is part of European Horizon 2020 in a move to install wind turbines of more than 10 MW. This is in part thanks to an anchoring system made of high-performance polymers that reduces the movement of a platform.

Collectively, the system will be composed of the aforementioned hybrid system, lightweight wiring and a high-performance power export system.

In using materials that are more resistant to the environment, along with being more lightweight, reports also indicate that there is likely to be a reduction in installation and maintenance cost by over 50%. The project is expected to conclude in March of 2022.

Three environments have been selected for testing: the MARIN basin, to examine global performance under specific conditions; the Dynamic Marine Component Test facility (DMaC-UNEXE), for testing prototypes on a large scale; and the PLOCAN Marine Test Site, for examining novel materials that will be subject to seawater conditions.

At the end of October, the U.S. Department of Energy’s Advanced Research Projects Agency-Energy awarded the National Renewable Energy Laboratory $5.7 million in funding for floating offshore wind turbine research. The NREL is the DOE's primary national laboratory for renewable energy and energy efficiency research and development and is operated by The Alliance for Sustainable Energy, LLC.

According to NREL, the program was formed to develop radically new floating offshore wind turbines by maximizing their rotor-area-to-total-weight ratio while maintaining or ideally increasing turbine generation efficiency. The program also involves building new computer tools to facilitate the FOWT design which will be validated though data collected from full and lab-scale experiments.

Specifically, researchers from NREL will be focusing on:

Additionally, NREL is also planning on working on other ATLANTIS projects funded at the University of Maine, University of Texas at Dallas, Rutgers University and the company WS Atkins.