$8B LaGuardia Project to Get Fast-Tracked

The state government and airlines are in agreement as New York Gov. Andrew Cuomo announced plans for a “supercharged” reopening of New York City, which involves a fast-track for multiple infrastructure plans, including work at the $8 billion LaGuardia Airport project. 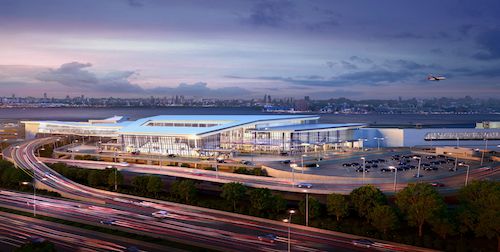 New York State
The state government and airlines are in agreement as New York Gov. Andrew Cuomo announced plans for a “supercharged” reopening of New York City, which involves a fast-track for multiple infrastructure plans, including work at the $8 billion LaGuardia Airport project.

Delta’s $4 billion part of the project takes place at Terminals C and D and began in 2017 and parts have been completed. Terminal B is taking up the other $4 billion. (Its first 18-gate new concourse opened in December 2018.)

During a press conference from Cuomo earlier this week, he said that work on LaGuardia and the Penn Station rebuild should be fast-tracked while “ridership is low and while we need the jobs.”

While some of the “supercharging” will need federal approval, the issues are on the docket for the governor’s next discussion with President Donald Trump.

Cuomo’s plan announcement came just days after Delta CFO Paul Jacobson went on record to say that the airline is seeing an opportunity to accelerate construction on its terminal projects.

This move, he says, could not only complete the project faster, but it could also save money.