As the fight against the COVID-19 pandemic continues, temporary hospitals and healthcare facilities are reaching completion across the United States.

Recent reports include a temporary hospital at the Bergen New Bridge Medical Center in Paramus, New Jersey, as well as two facilities in Brooklyn and Queens in New York City.

Holt Construction recently announced that it, along with the U.S. Army Corps of Engineers, Bergen County and FEMA, has successfully completed a temporary hospital in just 14 days.

“The two fully-equipped tents, the first of its kind for Army Corps temporary facility construction standards, will serve as a treatment facility for acute, non-COVID related patients due to the influx of COVID-positive patients in the main building,” the company said.

“The temporary hospital will serve an additional 100 patients total and is located in a large parking lot adjacent to BNBMC’s main building with a covered walkway linking the two facilities.” 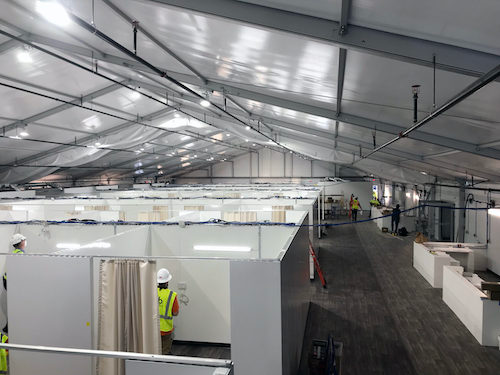 In terms of utilities, the temp structure required plumbing and sprinklers to be run from the main hospital into the parking lot. New incoming primary power with a stepdown transformer was also provided to power the tents. Life safety provisions were installed including a fire alarm, sprinkler, fire extinguishers and other systems.

According to Holt, this required a significant coordination effort with assistance from local architects and engineers.

“The team completed the project with help from the union labor workforce including over 80 carpenters, 20 electricians and 20 plumbers working in three shifts around the clock,” Holt said.

“Each shift was staggered in compliance with CDC, OSHA and Holt health and safety guidelines. Social distancing was strictly enforced at all times across the project site and all personnel were equipped with N95 facemasks, face shields, gloves and goggles, in addition to sanitation stations upon entering and exiting the site.”

Aecom was awarded the contract with the New York City Department of Design and Construction on March 31. While the financials of the deal were not disclosed, Aecom provided construction management, emergency engineering and grant management services for the project.

“Aecom’s extensive healthcare and disaster recovery experience enabled us to rapidly respond to the New York City Department of Design and Construction’s needs during this extraordinary crisis,” Steve Morriss, Aecom’s President of Design and Consulting Services Americas, said in a statement.

“Our proven history in working with the other stakeholders, including New York City and federal agencies, enabled us to deliver these critical hospital facilities quickly and safely.”

The 450-bed hospital was constructed as part of the U.S. Army Corps of Engineers efforts to alleviate pressure on local hospitals from anticipated surges in COVID-19 patients.

In a press conference on April 8, the Corps, joined by Florida Governor Ron DeSantis and other state and local officials, announced that construction firm Robins & Morton (Birmingham, Alabama) had been selected to convert 250,000 square feet of the Miami Beach Convention Center into a field hospital, complete with isolation rooms.

The awarded contract was reported to be worth $22.5 million and was slated to open by the end of the month, giving the company only two weeks to complete the project.

During construction efforts, Robins & Morton was reported to have up to 250 people—made up of craftworkers, over 20 contractors from the South Florida area and more than 40 of its own employees—onsite, working around the clock to reach the project’s deadline.