Announced in a press release yesterday (May 6), SSPC: The Society for Protective Coatings and NACE International, The Corrosion Society have named Robert H. Chalker Chief Executive Officer of the new, combined organization.

Bill Worms, who has served as Executive Director of SSPC since 2015, will continue to head SSPC at its Pittsburgh headquarters throughout the organizations’ combination process.

Prior to becoming the CEO of NACE in 2010, Chalker obtained nearly 20 years of association management experience through his roles as Managing Director of ASQ Global and Director of Global Development and Strategic Planning for the Society of Automotive Engineers (SAE International). 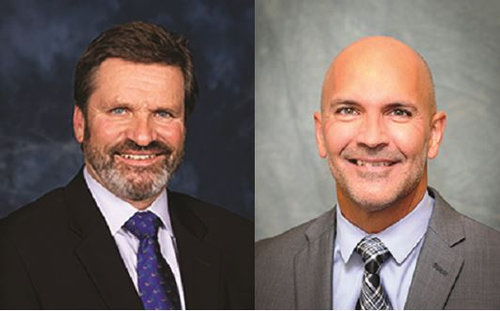 Photos Courtesy of NACE and SSPC
Announced in a press release yesterday (May 6), SSPC: The Society for Protective Coatings and NACE International, The Corrosion Society have named Robert H. Chalker (left) as Chief Executive Officer of the new, combined organization.

Chalker earned his MBA at Oakland University (Rochester, Michigan) and completed his undergraduate studies at the University of Cincinnati, where he received a bachelor’s degree in industrial engineering.

“I’m honored to lead these two venerated organizations through this monumental change,” said Chalker. “This is an opportunity to provide coatings and corrosion professionals worldwide with more mission-driven value, making societies safer by strengthening the standards, education and certification programs that makes our members the best at what they do.”

In referencing Worms, Chalker added, “In its 70-year history, SSPC has only had five Executive Directors. Not many people realize that. Bill came to SSPC in 2015 not only with the reputation as a steady leader, but also as someone who could take SSPC to the next level. His performance as an executive did not disappoint. He’s been aggressive in expanding SSPC’s global footprint and pushing the organization to new heights of success. Without that kind of growth, I don’t think we would be talking about combining organizations right now. Bill’s leadership has been that impactful and a true testament to his capabilities.

“In just five years, Bill has managed to build a legacy that will be foundational to success of the new organization,” said Chalker. “What Bill has done on behalf of SSPC’s members and the coatings profession has elevated the value of SSPC programs—and strengthened safety, environmental, and economic benefits afforded to industry through those important programs.”

Worms also commented on the announcement: “I’ve been honored to lead SSPC over the past five years. It was a new challenge for me coming from the corporate world, but it has been very fulfilling.” He concluded that he’s “looking forward to working with Bob and the transition team to help the new organization take shape.”

In addition to Chalker’s refined position, he also sits on the boards of the Katy Area Economic Development Council and Council of Engineering and Scientific Society Executives and is a member of Texas A&M Engineering Experiment Station’s Industry Advisory Board.

At the beginning of this year, the organizations began releasing a series of updates, beginning Jan. 10, which gave a future overview of both update schedules and discussion-related milestones.

According to that update, the SSPC-NACE Task Group was focusing on minimizing disturbance to the industry and wished to maintain overall program quality and continuity.

The week after, the organizations released part one of the membership considerations update, they released a fourth update regarding standards used by industry professionals worldwide.

Prior to the end of the month, the organizations released their seventh update, which covered education, and an eighth update regarding the part two of the membership component of the agreement, along with a question-and-answer forum.

In April, the organizations opened a two-week-long voting period to its members after more than a year of discussions between the leadership of both organizations. The voting period closed on April 17, revealing that 88.3% of SSPC members and 89% of NACE members voted in favor of the merger.

“This was a vote of historical importance to SSPC members and to the coatings and corrosion industries,” said SSPC President Joseph Walker.

“The level of engagement and interest throughout the process and the impressive showing for the vote demonstrates the enthusiasm the industry has for the potential of this combination. I look forward to working with my colleagues at NACE as we move forward on creating this new organization.”

NACE President Terry Greenfield added: “With what is clearly a resounding ‘yes,’ the NACE membership has spoken. As a member and as NACE’s president I could not be more excited with this result. This will bring more benefits and resources to the members of both organizations and it will have a strong and positive impact on the coatings and corrosion profession worldwide.”

According to the previous updates, the organizations had decided that members will become “NewOrg members,” having full access to both entities, including equal voting and volunteer rights and privileges in both organizations.

The updates also noted that all current NACE and SSPC individual members will become members of “NewOrg” Premium Individual Membership for the remainder of their current membership term starting on Jan. 1, 2021. Upon expiration, members will be able to choose to renew at either the Premium or Core level of membership.

Currently, leaders of SSPC and NACE are planning on a Jan. 4, 2021 debut for the new association.