The 450-bed hospital was constructed as part of the U.S. Army Corps of Engineers efforts to alleviate pressure on local hospitals from anticipated surges in COVID-19 patients.

In a press conference on April 8, the Corps, joined by Florida Governor Ron DeSantis and other state and local officials, announced that construction firm Robins & Morton (Birmingham, Alabama) had been selected to convert 250,000 square feet of the Miami Beach Convention Center into a field hospital, complete with isolation rooms.

The awarded contract was reported to be worth $22.5 million and was slated to open by the of the month, giving the company only two weeks to complete the project. 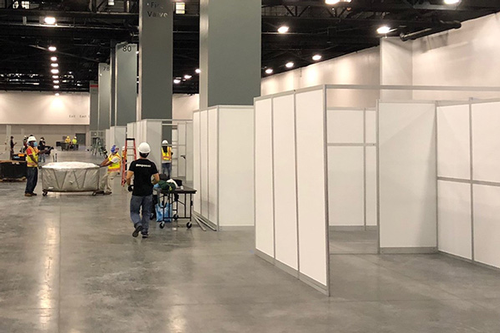 “As we were wrapping up details of the contract, we were already working on the logistics and had our key project team members in place within 24 hours so that work could start the next day,” said Robins & Morton Senior Project Manager Johnathan Peavy.

During construction efforts, Robins & Morton was reported to have up to 250 people—made up of craftworkers, over 20 contractors from the South Florida area and more than 40 of its own employees—onsite, working around the clock to reach the project’s deadline.

Over the course of the project, workers followed COVID-19 health and safety protocols, in addition to CDC guidelines in order to help protect everyone on the job.

“We understand the critical nature of these projects and their role in supporting vital healthcare services during the COVID-19 pandemic. With that, we understand our role is to ensure that this project is backed by the full support of our company to usher it to completion in its short timeframe,” Robins & Morton President and COO, Robin Savage, said.

“Projects like these are rewarding – the ones that really make a difference. They make being a builder so meaningful. We are grateful for the opportunity to contribute to preparation efforts in the community at this difficult time.”

Following completion, Channel 7 News reported that the Corps handed the site over to the Florida National Guard whose medical teams will be treating patients should local hospitals become overwhelmed with those infected with COVID-19.

Prior to COVID-19 being announced as a global pandemic, crews from China Construction Third Engineering Bureau Co. completed a 33,900-square-meter (364,896-square-foot) prefabricated hospital in Wuhan, China, in just 10 days. The hospital includes space for up to 1,000 beds and began accepting COVID-19 patients on Feb. 2.

To build the hospital, Chinese officials took a page out of its 2003 book for reference, when 7,000 workers in Beijing constructed the Xiaotangshan hospital out of prefabricated materials to combat the Sars outbreak of that time.

At the time of the announcement, a second hospital for COVID-19 patients, Leishenshan, was reportedly 75% complete and was also being constructed by Third Engineering.

By March, multiple state governors were reported to be in talks with the Corps for temporary hospital plans to combat capacity issues resulting from the COVID-19 pandemic.

Around the same time, Italian architects Carlo Ratti and Italo Rota announced their designs for intensive-care pods using shipping containers. Dubbed Connected Units for Respiratory Ailments, the first ICU pod prototype was being built in Milan at the time of the announcement.

Each pod was slated to contain all medical equipment needed for two COVID-19 intensive-care patients and could be connected to one another through an inflatable corridor.

Earlier this month, Pennsylvania Gov. Tom Wolf reported that crews are working around the clock to open the University of Pennsylvania Health System’s (Penn Medicine) Pavilion in Philadelphia despite government shutdowns of most construction projects in the state.

At the time, crews were working to complete about 120 of the planned 500 total patient rooms as soon as possible, according to a project spokesperson. One half of the 120 beds will be in the emergency department and the other half will be long-term patient care.

There are reportedly 700 workers at the site spread out in three shifts; each worker is screened by clinical staff before they can begin a shift.

The administration noted that, while the goal is to never use the facility, it is working with the Corps to have the halls done by the first week of May.