International research firm, Lux Research Inc. (Boston), has recently issued its report, “Analyzing the Technical Barriers to Realizing the Hyperloop,” claiming that the first passenger-carrying high-speed Hyperloop projects shouldn’t be expected to open until 2040—at the earliest.

However, developers working on a Hyperloop project planned to connect Pittsburgh with Chicago—one possible route traveling through Cleveland and the other through Columbus—disagree with the study’s findings.

Since the reveal of the hyperloop concept was presented by Elon Musk, founder of Tesla, Paypal and SpaceX, the race for creating the high-speed transit was on.

In 2016, Bjarke Ingels Group unveiled a sneak-peak of what would be the Hyperloop One (now known as Virgin Hyperloop One) system, connecting Dubai to Abu Dhabi in the United Arab Emirates. This project was slated to be complete in 2020. 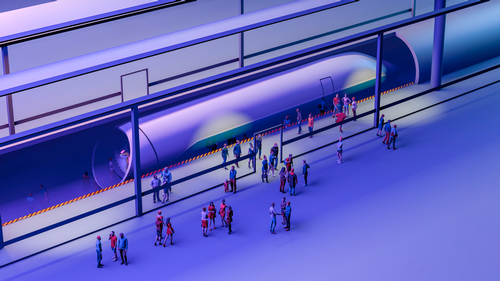 Naeblys / Getty Images
International research firm, Lux Research Inc. (Boston), has recently issued its report, “Analyzing the Technical Barriers to Realizing the Hyperloop,” claiming that the first passenger-carrying high-speed Hyperloop projects shouldn’t be expected to open until 2040—at the earliest.

By the summer of 2018, the Mid-Ohio Regional Planning Commission announced a partnership with Virgin Hyperloop One, to study the options of building a hyperloop connecting Pittsburgh, Columbus and Chicago.

A few months later in February, HTT entered an agreement with the Illinois Department of Transportation and the Northeast Ohio Areawide Coordinating Agency to study the possibility of a Hyperloop system between Chicago and Cleveland.

Since the reveal and feasibility study agreement with NOACA and the Illinois DOT, however, HTT has also reported progress on projects in two countries: a track set to be built in Abu Dhabi, and the company’s third test track, under construction in France.

According to CNBC, the 10-kilometer (6.2-mile) Abu Dhabi Hyperloop line will be developed close on the border of the Abu Dhabi and Dubai emirates, and will be completed in several phases.

The France-based track will also be built in phases and will include a closed 320-meter (1,079-foot) system and a 1-kilometer-long system, elevated to 5.8 meters in height by pylons. The track was slated for completion by 2019.

In March 2019, Pennsylvania Turnpike Commission approved a $2 million contract with Los Angeles-based engineering and construction firm AECOM for a hyperloop study. The study looked at the possibility of constructing a hyperloop that would connect Philadelphia, Harrisburg, and Pittsburgh, with a leg to Wilkes-Barre/Scranton.

By July, the government of Maharashtra, located in India, announced that the development of a hyperloop is a public infrastructure project, and named Virgin Hyperloop One has one of the original project proponents.

Virgin, working in collaboration with global ports owner DP World, will spearhead the project. Both Mumbai and Pune, which are roughly 100 miles apart and would be connected by the project, are located in western India.

Beijing-based architecture firm MAD Architects also announced a collaboration project with HTT for a new elevated transport system design back in September. The two previously collaborated for the 2020 Expo in Dubai. In taking the next steps, the team plans to integrate its full-scale passenger capsule for human trials in 2020.

And most recently, in November, the Northeast Ohio Areawide Coordinating Agency (NOACA) announced it was looking to connect Pittsburgh to its proposed Great Lakes Hyperloop System after receiving a $100,000 donation from the Richard King Mellon Foundation.

Pittsburgh Post-Gazette reported that a study to look into the possible connection of Pittsburgh, Cleveland and Chicago would cost $1.3 million and would be split between NOACA and HTT.

Designs show that once inside a tube, the transporting pod will be moved by an electric motor. Once the motor has accelerated to proper speed, magnets force the pod to levitate, propelling it forward at an even faster rate. Air is also removed from the tube through a vacuum, resulting in little wind resistance.

Pods are projected to hold about 24 people and are expected to travel over 500 miles per hour.

Although most hyperloop developers envision commercialization of high-speed transit by 2030, researchers from Lux claim that the prediction is too optimistic.

The reason? Lux says, “While the Hyperloop concept is technically feasible, it will require significant development to become cost-effective. As proposed Hyperloop projects are seeing increasingly large estimates in cost per mile, and key variables in operating costs are unknown, Hyperloop projects are a long way from proving economic feasibility.”

Additionally, the lack of government-certified testing, support, regulations, and even the challenge of decarbonization, could also lead to development delays.

Lux reports that they came up with this conclusion through patented tools and global searches where completed “hyperloop” and “vacuum train” projects were mentioned. The firm then divided up its findings according to subsystems—like pillar and tube design—and by direct or indirect relation to hyperloop infrastructure.

However, Rob Miller, Chief Marketing Officer for HTT, the firm working with the Northeast Ohio Areawide Coordinating Agency on the route through Cleveland, disagrees with the report.

“We are moving ahead on a much more aggressive time frame,” said Miller. Adding that HTT is currently working with private investors, aiming to break ground in early 2021 for a 5-kilometer facility in Abu Dhabi. The project hopes to be begin moving passengers between two stations in 2022 and that its success will satisfy U.S. regulators.

In another project, headed by Virgin Hyperloop One and the Mid-Ohio Regional Planning Commission, officials report that its project in Mumbai, India, is also predicted to be complete before 2030.

“By 2025 to 2030, we want hyperloop operating somewhere in the world,” said Ryan Kelly, Virgin’s Head of Marketing and Communications. “We still feel very bullish that 2040 isn’t going to be the number.”

Virgin adds that before the company breaks ground in India, it hopes to establish a government test facility in the U.S. to set industry standards and ease the regulation process first. The project is expected to cost several hundred million dollars and create several hundred jobs. While a location for the project is still being decided, the company believes the facility could be completed by 2025.

Walsh adds that she believes the Lux study might sound reasonable for most major transportation projects, but because of the interest in new hyperloop travel, there is more motivation to see these projects completed quickly.

The Pittsburgh Post-Gazette also points out that the current COVID-19 pandemic and economic downturn could also push for a quicker implementation of hyperloop projects, as they promote non-polluting forms of transportation.

“We think we’ll be in a period where we’ll see an acceleration in public infrastructure projects,” Miller said. “We see it really as an opportunity. We’re ready.”