In March 2019, The Boring Co. was approved by the Las Vegas Convention and Visitor Authority’s board of directors for the construction of an underground express tunnel connecting downtown Las Vegas, the city’s convention center, airport and other points of interest.

The LVCVA selected TBC as one of the firms to enter exclusive contract negotiations to design, construct and operate a Loop system for the Las Vegas Convention Center. The loop is to provide a fast and convenient transportation option for convention and trade show attendees on the LVCC campus.

The LVCVA hopes to allow 4,400-11,000 people to use the system per hour. However, that kind of volume would depend on the station sizes and number of vehicles, estimated to be between 90 and 140, within the tunnels. Once inside an AEV, which are Tesla Model X and Model 3 vehicles, the modified chassis will be able to transport up to 16 passengers with sitting and standing room at 155 miles per hour. 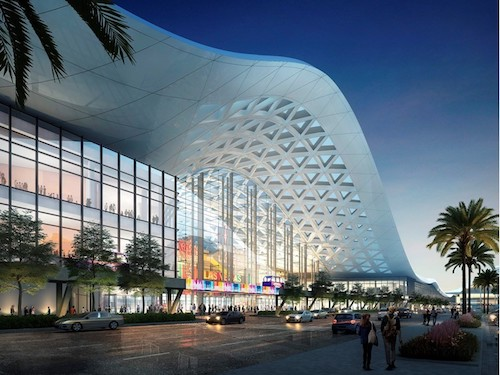 By May, a $48.6 million contract with TBC was approved for the construction on the LVCC Loop. Clocking in at a fraction of the $215 million bid for an elevated rail system, although, more funding was slated to present itself as TBC continued to hit milestones: $2.5 million for excavation of the first station and $3.2 million for completing the first 100 feet of tunnel. All system infrastructure will have to be built on payments that total less than $14 million.

However, if the system cannot support full passenger capacity during the first year and a half of operation, TBC will face a penalty of $300,000 per event, which caps at $4.5 million.

In October, construction work on the project officially entered operation with reports indicating that the boring machine would likely emerge from the other side of its work in January, assuming there were no delays.

Last month, TBC’s President Steve Davis announced the possibility for additional underground transit systems throughout the Las Vegas resort corridor, should the current convention center tunnel prove to be a success. Once profitable, Davis envisions that tourism industry stakeholders will be ready to move forward with ongoing talks about expanding the system from the airport to the Strip and into downtown.

Work on the aboveground stations for the underground rail transportation also began last month. The stations are reported to include elevator and escalator access to the tunnels, underground stations, pedestrian protection from the elements, video surveillance, WiFi and vehicle tunnel access points.

The first of the two tunnels was completed in February.

For the expansion, the latest update came at the end of March, when officials announced that workers began pouring the 600,000 square feet of concrete flooring for the main exhibit hall. At that time, construction was 77% complete.

The Las Vegas Review-Journal reports that despite the $79 million budget cut and the new protocols put in place in light of the COVID-19 pandemic, construction on the projects is still on schedule.

Officials note that approximately 1,000 laborers are on the site daily, and that no Coronavirus cases have been reported.

In addition, LVCVA President and CEO Steve Hill said that the people-mover’s second mile-long tunnel is “making exceptionally good progress” and it actually ahead of schedule as crews have also began excavating the underground station.

Both the transportation system and the expansion are slated to be complete for the Consumer Electronics Show in January 2021.