Researchers from Princeton University have been looking at new designs for protective infrastructure to combat storm surges along the nation's coastlines.

Thier findings have since been published in the Journal of Structural Engineering.

Designed as oversized duel-purpose kinetic concrete umbrellas, the canopy-like structures serve as protection from sunlight by day, however, in the event of storm, can be transformed into a barrier to protect communities against heightened waves and incoming tides.

The new approach arrives as costal communities are beginning to construct more seawalls in order to protect its people and properties from extreme flooding caused by stronger storms and higher sea levels. 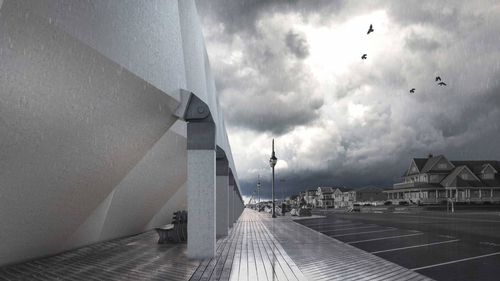 “This is so much more than just your typical coastal defensive structure,” said lead study author Shengzhe Wang, a PhD student in civil and environmental engineering. “It’s the first time that anyone has really tried to integrate architecture as an inherent component to a coastal countermeasure.”

According to study co-author, Maria Garlock, a professor of civil and environmental engineering, the umbrella design was inspired by Spanish-born architect Félix Candela. Throughout the 1950s and 1960s, Candela designed hundreds of buildings with thin-shelled hyperbolic paraboloid-shaped roofs in Mexico.

The hyperbolic paraboloid design (also known as hypar), is a saddle-like structure that curves inward along one axis and outward along the other. Prior to studying potential coastline protections, Garlock and co-author Branko Glišic, an associate professor of civil and environmental engineering, had been using the structures to explore energy and rainwater capture.

During their research, Garlock was inspired by the idea that the same structures could be used differently, and more specifically, as a seawall. In continuing research for the new idea, Garlock and Glišic received funding from Project X, a program that allows engineering faculty members to pursue unconventional ideas. Work for the project was also supported by the university’s Metropolis Project.

Wang later joined the team to test the umbrella designs based on its geometry and structural strength using virtual stimulations and computational modeling. In studying how the structures would perform, the team complied storm surge date ranging between 1899-2012 along the East Coast.

As reported by the university, the hypar-shaped umbrella shells are designed to measure four inches thick and eight meters (roughly 26 feet) along each side. The structures are intended to be constructed using reinforced concrete and would be placed side-by-side on top of 10-foot-tall, 20-inch-square columns using a functional hinge at the vertex where the column meets the middle of the umbrella.

“These shells are so thin that anyone looking at this would not be inclined to believe that these structures would be capable of stopping such large forces from water,” said Wang. “But we’re able to take advantage of the geometry of the hypar shape that gives the structure the additional strength that’s required.”

Through the research, the team found that the structures were able to remain stable when faced with a wall of water roughly 75% of their deployed height. In moving forward with the study, Wang has built a 6-inch miniature version of the umbrellas, which are being tested inside a 10-foot-long water channel to report on the dynamic forces of turbulent flows and wind tunnel testing.

Princeton reports that because the next steps of the study are so complex in governing how the structure will perform, the team has added another graduate student, Vanessa Notario, to study the flow of forces in the shell as a part of her M.S.E. thesis.

In pursuing additional research, the team also plans to look at more sustainable materials, in addition to the use of sensors, actuators and other systems to both control the umbrellas and capture solar energy and storm water.

For this portion of the research, the team reports that it will be collaborating with Ning Lin, an associate professor of civil and environmental engineering at Princeton whose team recently produced updated 21st-century flood maps for the U.S. Atlantic and Gulf Coasts. The team will also be working with an unnamed geotechnical engineer and are consulting with the New York City Mayor’s Office of Resiliency.

“This is a completely new way of thinking about coastal defense structures,” said Garlock. “Moving forward, our goal is to make these umbrellas part of a smart, sustainable community.”