In Philadelphia, crews are working around the clock to open the University of Pennsylvania Health System’s (Penn Medicine) Pavilion to aid in the treatment of COVID-19 patients.

The $1.5 billion, 17-story, 1.5 million-square-foot hospital is slated to open this month—15 months ahead of schedule.

Despite government shutdowns of most construction projects in the state, Gov. Tom Wolf, along with the Philadelphia Building and Construction Trades Council, approved continued construction at the site, in order to increase capacity for the health crisis.

The bronze-clad exterior of the building was reportedly finished late last year.

Crews are now working to complete about 120 of the planned 500 total patient rooms as soon as possible, according to a project spokesperson. One half of the 120 beds will be in the emergency department and the other half will be long-term patient care. 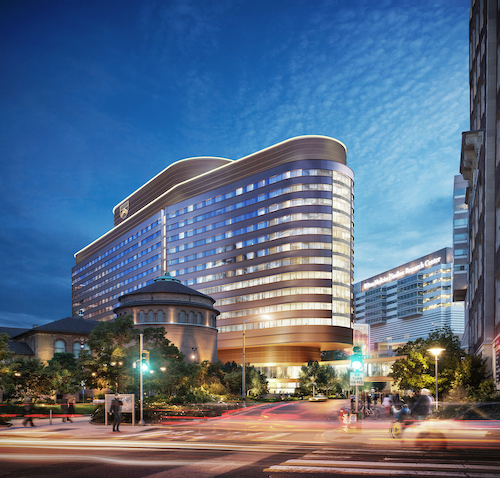 Penn Medicine
In Philadelphia, crews are working around the clock to open the University of Pennsylvania Health System’s (Penn Medicine) Pavilion to aid in the treatment of COVID-19 patients.

“What these crews are doing—working day and night just like our doctors, nurses, and staff caring for patients—is herculean,” said Kevin B. Mahoney, Chief Executive Officer of the University of Pennsylvania Health System.

“Philadelphia is facing a crisis, and these men and women stepped up to do lifesaving work. There is no other team in the world that could execute the mission we’ve asked of them, and their efforts will make a tremendous difference in our ability to care for our neighbors and the patients this pandemic will bring to us.”

While the rushed rooms will be in a generally unfinished building, the spaces will be outfitted with “state-of-the-art technology and equipment that allow for top-notch patient care,” according to the school.

“There are dozens of elements related to this project that we’ve needed to assess and say, ‘We can’t fully realize our final plans yet, but this is how we can deal with the current needs,’” said Stephen Greulich, Penn Medicine’s Associate Vice President for large capital projects.

“The building is about 75% completed and about a year away from completion, but the project team has been dedicated to figuring out how we can get these rooms fully functioning as quickly as possible and ensure they can remain open as long as they need to. There’s been an unbelievably positive response to this challenging, changing situation; everyone has really jumped on board to get this done.”

There are reportedly 700 workers at the site spread out in three shifts; each worker is screened by clinical staff before they can begin a shift.

Last month, multiple state governors announced that they were in talks with the Army Corps of Engineers for plans on site for temporary hospitals to combat capacity issues resulting from the COVID-19 pandemic.

Both New York Gov. Andrew Cuomo and Massachusetts Gov. Charlie Baker were among those who confirmed talks with the Corps.

Cuomo announced that he has accepted the recommendation from the Corps for four temporary hospital sites in New York— the Jacob K. Javits Convention Center, SUNY Stony Brook, SUNY Old Westbury and the Westchester Convention Center.

Cuomo visited each of the sites and gave the green light for construction to start immediately. Hospitals at the SUNY campus sites will reportedly be constructed indoors with outdoor tent support and the dormitories on the campuses will be used for healthcare staff to stay while working at the sites.

Baker confirmed his Corps talks via press conference over the weekend and said that they are also looking at college dorm sites as prime spots to erect temporary facilities.