USDOT Applies for $1B in Grant Funding

The announcement was published through a Notice of Funding Opportunity on Feb. 19.

Back in April 2018, the USDOT announced that it would be replacing the Transportation Investment Generating Economic Recovery (TIGER) grant program, which previously supplied funds to infrastructure projects since 2010, with the BUILD Transportation Discretionary Grants program.

The BUILD grants program focuses more on rural projects, and by August, was approved for $1 billion in infrastructure grants for fiscal 2019. 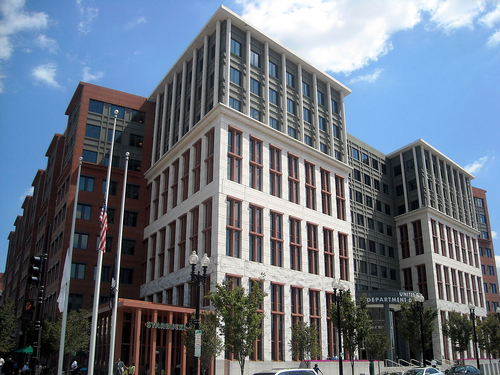 AgnosticPreachersKid, CC BY-SA 3.0, via Wikimedia Commons
Earlier this month, the United States Department of Transportation announced that it would be applying for $1 billion in discretionary grant funding for the Fiscal Year 2020 through the Better Utilizing Investments to Leverage Development (BUILD) Transportation Discretionary grants program.

In December, $1.5 billion in infrastructure funding went to 91 projects across 49 states, including the District of Columbia, with bridge projects taking home more than two-thirds of the grant money as part of the program for fiscal 2018.

Two months later, BUILD grants reportedly took a $600 million cut in the $333 billion fiscal year 2019 spending bill President Donald J. Trump signed. Under the fiscal plan, which funds both the DOT and other agencies in order to prevent another government shutdown, allocation was mandated to be split evenly between urban and rural projects.

In April, the U.S. DOT announced a NOFO totaling $900 million in grants through the BUILD grants program. Regardless of the cut from funding earlier that year, Chao reported at the time that large portions of the funding would be spent specifically toward improving rural infrastructure.

In November, 55 projects were announced as grant recipients for the 2019 BUILD program, spreading across 35 states. Six projects in total won the maximum $25 million grant amount, including: a highway interchange in Aurora, Colorado; bridge work in Providence, Rhode Island; road reconstruction in Houston; a marine terminal in Anchorage, Alaska; dam mitigation and a recreation trail in Des Moines, Iowa; and the replacement of a bridge in Augusta, Maine.

Most recently, in January, another NOFO was announced by the U.S. DOT, stating that $906 million was available through the Infrastructure for Rebuilding America (INFRA) discretionary grants program. Similar to BUILD, INFRA grants were created through the FAST Act of 2015, and aim to help rebuild aging infrastructure in America by offering applications for financial assistance from the federal government.

According to the press release from USDOT, the Department intends to award at least 25% of INFRA grant funding to rural projects involving highway and multimodal freight projects that have a national or regional economic significance.

Another 10% of the funding has been reserved for small projects, which if awarded, will receive at least $5 million. The rest of the available funding will be split up between large projects, which are slated to receive a minimum of $25 million per awarded project.

According to USDOT, the BUILD grants are slated to be awarded to planning and capital investments in surface transportation infrastructure. The DOT expects to award 50% grant funding to rural projects that deliver positive benefits for the surrounding communities and are consistent with the ROUTES initiative.

The decision arrives as the Trump Administration looks to improve the nation’s infrastructure in FY 2020. In this round of grant awards, the maximum award will be $25 million, while no more than $100 million will be awarded to a single State.

Applications for the grants will be accepted until May 18. In the time until the deadline, USDOT will be hosting technical assistance webinars to prospective applicants.