Last week, Pittsburgh’s Phipps Conservatory and Botanical Gardens, announced that its Center for Sustainable Landscapes has been certified using the BREEAM USA standard for existing buildings.

About Phipps and the CSL

While Phipps opened in 1983, the net-zero, 24,350 square-foot education, research and administration complex opened to the public in 2013. 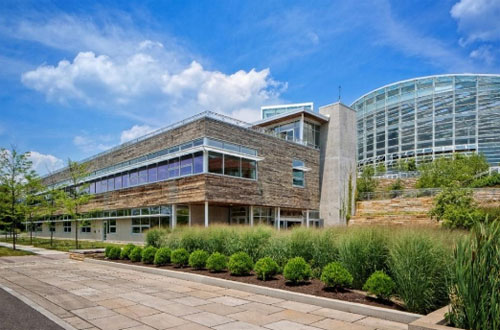 The $14.5 million project was designed by The Design Alliance Architects, of Pittsburgh, and Andropogon Associates, a Philadelphia-based landscape architecture firm. It was constructed by Turner Construction Company. Many of the materials used to build the facility were manufactured locally.

The structure’s exterior cladding system consists of a metal and glass curtain wall featuring Kawneer 1600 Wall System and PPG’s insulated glass units, according to a product list that was provided by Phipps at the time.

On-site lagoons, a green roof, permeable paved surfaces, a water distillation system and wetlands were designed to capture, treat and reuse all water on site.

In 2015, the CSL declared itself the first project in the world to achieve four of the world’s highest standards for green building by announcing its fourth certification, the Living Building Challenge.

At the time, only six other projects had been certified with the Living Building standard.

A Bit About BREEAM

The program provides managers and owners with a “framework for improving the operational sustainability of their asset, reducing energy costs and consequently carbon footprints,” according to the organization.

Developments are awarded credits for achieving targets specified in nine categories, including energy and ecology. The final total of credits determines the rating and certification on a scale of Pass, Good, Very Good, Excellent and Outstanding.

BRE Global first branched out into the American market in the summer of 2016, when it released a free technical manual designed specifically for the U.S.

Based on the international BREEAM In-Use system, the manual was reportedly tailored to the particulars of the U.S. green building sector, taking into account specific legal and governmental requirements in place.

BREEAM has more than 2 million registered projects and over 567,000 certified buildings in 81 countries.

Last June, the BRE announced that it was updating its methodology’s International New Construction Standard for use in the United States.

The adaptations for the BREEAM International New Construction standard included a regional approach that accounts for varying building codes, best practices and industry standards across the U.S.

In addition, the BREEAM In-Use standard was amended to include for the first time the assessment and certification of sustainability performance for existing residential and multifamily buildings in the U.S.

“At Phipps, we believe that public gardens have a role to play in mitigating the challenge of climate change, and we believe the answer lies in regenerative thinking that extends to our buildings, programs and operations,” said Richard Piacentini, Phipps’ President and CEO.

“The achievement of the BREEAM rating helps us to communicate the value of green building to new audiences while placing us in the company of some of the world’s most innovative sustainable building projects.”

The certification was carried out by BREEAM USA In-Use licensed Assessor Julia Craighill, of Ensight Consulting.

“This is a significant achievement and another milestone for BREEAM in America,” said Shamir Ghumra, Director of BREEAM at BRE Global.

“The Phipps team, working closely with Julia Craighill at Ensight Consulting, have gone beyond best practice and have really set the bar in terms of the BREEAM rating achieved. With so many visitors coming to Phipps every year we hope that this certification will inspire others to do the same.”