The European Union has published the official delegated regulation to classify titanium dioxide as a suspected carcinogen by inhalation. The decision will be enforced after more than a year of a transition period.

The European Chemicals Agency’s Committee for Risk Assessment (RAC) announced June 9, 2017, that it concluded that TiO2, a substance commonly used in paints, construction materials and other industrial and consumer goods, meets the criteria to be classified as a suspected cause of cancer via inhalation, under Category 2.

This followed a France dossier that recommended cancer labeling for TiO2. At the time, French regulators argued that the substance is likely a Category 1B carcinogen, meaning it is known to cause cancer in humans. The French regulatory body ANSES sought “harmonized classification” for the substance across the entire EU.

The RAC’s recommendation that it be classed in Category 2 means the body believes TiO2 is a suspected carcinogen and should be treated as if it causes cancer, but stops short of calling the substance a "known carcinogen." 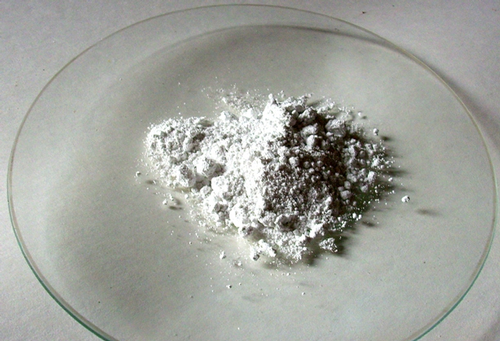 Ondrej Mangl, public domain, via Wikimedia Commons
The European Union has published the official delegated regulation to classify titanium dioxide as a suspected carcinogen by inhalation. The decision will be enforced after more than a year of a transition period.

TiO2, a white inorganic substance, occurs naturally in several kinds of rock and mineral sands and has been used in many products for decades. It can be manufactured for use as a pigment or as a nanomaterial.

Many in the coatings industry, including the American Coatings Association, oppose the measure.

The ACA issued a statement following the RAC’s 2017 announcement asserting that the recommendation is unfounded.

“There is considerable industry concern that the basis for the opinion is flawed and does not inform on risk to humans,” the statement read. “It is important to consider that the risks profiled are not attributable formulated products, like paint, where TiO2 dust is embedded in the mixture.”

In the coatings industry, TiO2 is most notably used as a white pigment, in industrial and protective coatings as well as architectural paints. The ACA has repeatedly expressed concerns that all paint products containing the substance could be labeled as carcinogens under the EU’s classification system.

The Titanium Dioxide Manufacturers Association, which represents the TiO2 industry, has also previously issued a statement expressing its disappointment in the recommendation.

“The scientific evidence is clear: There are no grounds for classifying TiO2 as carcinogenic for humans by inhalation,” said Robert Bird, chairman of the TDMA. “Also, classification would do nothing to increase the level of protection of human health and the environment, which is the whole point of the labelling and classification system.”

The REACH Committee of the European Commission met several times to discuss the matter last year, without coming to a majority decision, which put the assessment in the hands of the Commission now in the fall.

In September 2019, the Commission said after an expert hearing that it would likely follow through with the classification, despite the objections.

In a response to that, the ACA released a statement saying that it is concerned about “the potential precedent set by such a decision" and says that the basis for classifying TiO2 as a cancer hazard is unjustified.

On Oct. 4, the Commission decided to move forward with the classification.

With the new regulation, titanium dioxide products that are in powder form containing 1% or more of the substance with aerodynamic diameter of 10μm or less are required to carry a cancer warning on the label.

For other forms and mixtures, the classification suggests specific notes to inform the consumer of precautionary measures that should be taken to minimize hazard.

Multiple industry groups have come out in protest, including the European Council of the Paint, Printing Ink and Artists’ Colors Industry (CEPE), which has stated, according to European Coatings, that: "the reasons behind the EU Commission’s decision are not related to the chemistry of titanium dioxide, but by the simple presence of dust particles in excessive quantities in the lungs, causing chronic inflammation of the lung cells in rats.”

The Titanium Dioxide Manufacturers Association, which also mentioned the rat study in its statement, has reportedly said that it is looking at the available options, including taking legal action against the EU.