The project is expected to take 13 years to complete.

Completed in July 2000, the Øresund Bridge—also known as the Øresund Fixed Link—comprises of not only a bridge, but the artificial island of Peberholm and a 4-kilometer-long Drogden Tunnel as well. Peberholm was built between 1995 and 1999 using 8 million m3 of excavated seabed material and 2 million m3 of stonework. 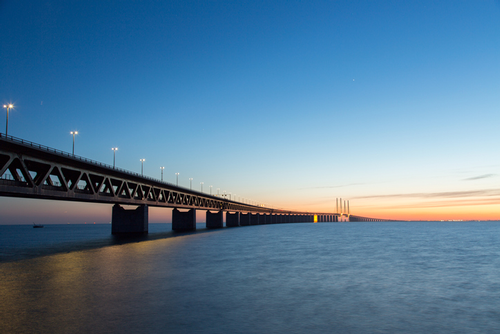 By 2011, the infrastructure was made famous by Nordic noir TV crime series The Bridge.

Over a decade after the bridge’s completion, a timeline for the coatings project was announced, originally estimated to take up to 15 years to complete. However, reports indicated that some repair coatings work had already been applied when necessary, and that layers wouldn’t be required to be removed prior to new applications, as the “current paint is in relatively good condition,” Bengt Hergart, Facilities Director at the Öresund Bridge Consortium, said at the time.

Authorities anticipated that work to paint the bridge portion of the crossing would begin in 2019 and continue through 2032.

Two years later, a solar cell system at the toll station was completed in May and has produced 225 MWh of power up to the start of this year.

According to Øresund’s website, more than 114 million vehicles have crossed the link from the structure’s inauguration to its 19th anniversary on July 1, 2019. Additionally, last year over 11 million single journeys across the bridge were made by passenger trains.

Shortly after the bridge’s anniversary, The Local announced that Germany firm Muehlhan had been awarded a 226 million Swedish kronor ($23 million) contract for the first four years of the anticipated coatings project. Originally, the project was slated to begin in October 2019.

Finance for the project was funneled through loans which are to be repaid from the revenue from traffic using the bridge. The Øresund Fixed Link, including landworks, is expected to be paid for by 2050.

As detailed by reports of the upcoming coatings project, the Øresund Bridge has kicked off applying new coatings applications on approximately 300,000 square meters (3,229,173 square feet) of steel.

“The top layer of the five-layer painting system will wear out within the next 10 years, so we have to apply a new top layer to be able to maintain the lower levels, which protect the steel from corrosion,” said project manager, Johan Nord.

To achieve the application of two new layers of paint, the bridge consortium special ordered custom-built platforms, allowing painters to be safe from passing trains and traffic.

“It’s a very special job because you are working 20 to 30 metres above sea level hanging in gantry cranes to get access to the bridge,” said the Chief Executive of Muehlhan Denmark, Jens Mørk.

Recently, European Storm Ciara caused the Øresund Bridge to close for several hours. A specific start date for the project has yet to be provided, however, the endeavor is reported to be the largest maintenance on the structure since 1999.