Westminster, Colorado-based space technology company Maxar Technologies has been recently awarded a $142 million contract from the National Aeronautics and Space Administration to develop a robotic technology capable of assembly and manufacturing whilst in orbit.

When first developing the technology in 2015, the payload then known as “Dragonfly,” was chosen by NASA’s public-private partnership program to further explore technologies that would specifically perform on-orbit robotic installations and reconfigurations of large solid RF reflectors.

"These awards enable us to continue to foster partnerships with the commercial space sector that not only leverage capabilities to meet NASA's strategic goals, but also focus on U.S. industry markets that are at a tipping point for commercialization and infusion,” said Steve Jurczyk, Associate Administrator for Space Technology Mission Directorate at the time. 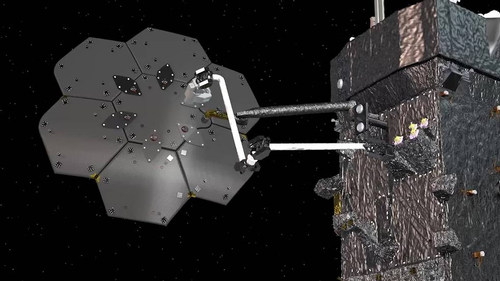 NASA
Westminster, Colorado-based space technology company Maxar Technologies has been recently awarded a $142 million contract from the National Aeronautics and Space Administration to develop a robotic technology capable of assembly and manufacturing whilst in orbit.

The fixed-priced contracts—ranging between $1-20 million in value—included milestone payments that required a minimum 25% corporate or customer contribution, though all awards were contingent on the availability of appropriated funding. The contracts were given approximately two years to present performance culminating in a system-level demonstration of the technology.

Now in its second phase of the partnership, NASA resources and industry contributions are fueling the project to gear up for a demonstration of the technology, slated to take place on NASA’s Restore-L spacecraft, which is designed to service and refuel satellites in low-Earth orbit.

In changing the development’s name from Dragonfly to SPIDER (Space Infrastructure Dexterous Robot), the payload includes a lightweight 16-foot-long robotic arm which will be used to assemble several elements to form a functional 9-foot-tall communications antenna. GeekWire reports that this procedure was already carried out successfully during a ground demonstration in 2017.

Additionally, the payload will also manufacture a 32-foot lightweight composite beam using MakerSat technology developed by Tethers. The technology is reportedly backed by $875,000 in financial support from NASA, which arrived in the form of two Small Business Innovation Research grants.

“We are continuing America’s global leadership in space technology by proving we can assemble spacecraft with larger and more powerful components, after launch,” said Jim Reuter, associate administrator of NASA’s Space Technology Mission Directorate. “This technology demonstration will open up a new world of in-space robotic capabilities.”

Once robotically assembled, the antenna will be able to conduct Ka-band transmission with a ground station, while the manufacturing element intends to verify the capabilities of in-space construction.

“In-space assembly and manufacturing will allow for greater mission flexibility, adaptability, and resilience, which will be key to NASA’s Moon to Mars exploration approach,” said Brent Robertson, project manager of Restore-L at NASA’s Goddard Space Flight Center in Greenbelt, Maryland.

According to NASA, Restore-L and SPIDER are administered by the Technology Demonstration Missions program based at NASA’s Marshall Space Flight Center in Huntsville, Alabama, on behalf of the agency’s Space Technology Mission Directorate. The SPIDER payload is managed by the Restore-L project within the Exploration and In-Space Services (ExIS) projects division (formerly known as the Satellite Servicing Projects Division), located at NASA’s Goddard Space Flight Center in Greenbelt, Maryland.

The spacecraft is expected to launch sometime in the mid-2020s.

Also in 2017, NASA announced that it planned to use 3D printing robots to create homes for future astronauts on different planets—however, the agency needed ideas for construction materials.

In the administration’s 3D Printed Habitat Challenge, a call was released for ideas for the fabrication of habitats, geared toward being built on the moon, Mars and wherever interplanetary exploration goes. The challenge lies in what materials to use for the 3D printing process, as the materials cannot be carried on the spaceship into orbit.

In April 2019, top three finalists for the challenge were named: first place was SEArch+ and Apis Cor, followed by Zopherous (second place) and Mars Incubator (third place). In the next round, slated for early May, finalists will be competing for $800,000 in prize money for the creation of 3D-print scale models of their designs.