In addition to the technical sessions, exhibit hall, networking receptions and other events on the agenda this week at Coatings+ 2020 in Long Beach, California, attendees will have multiple opportunities to hear updates and share their own comments on the potential combining of SSPC and NACE into one organization.

Monday afternoon, immediately following its annual business meeting, SSPC hosted the first in a series of planned town hall meetings regarding the possibility.

Led by SSPC Board Vice President Sam Scaturro, along with SSPC Executive Director Bill Worms, NACE CEO Bob Chalker and NACE President Terry Greenfield, the town hall sought to provide clarity on the discussions to date, provide an outlook for ongoing discussions, set a date for a membership vote and answer any questions about the process.

Scaturro outlined the main reasons the two organizations are considering combining, which include the need for a unified voice in the industry, standardization, international growth, simplification, integration and an expanded professional network.

Scaturro also explained the guiding principles behind a possible merger, including equal representation of organizations, with recommendations coming from a consensus of all representatives. He also confirmed that both existing brands will continue to be protected as separate entities in the marketplace, and continue to operate both SSPC’s office in Pittsburgh and NACE’s headquarters in Houston. 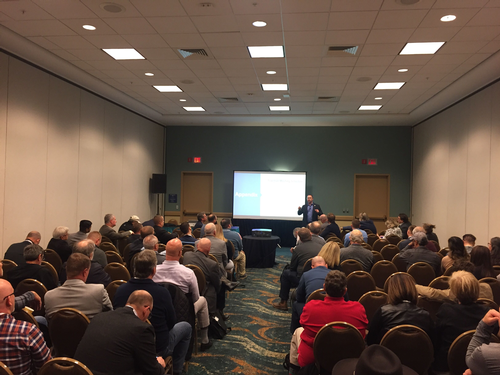 Photos: Technology Publishing Company
In addition to the technical sessions, exhibit hall, networking receptions and other events on the agenda this week at Coatings+ 2020 in Long Beach, California, attendees will have multiple opportunities to hear updates and share their own comments on the potential combination of SSPC and NACE into one organization.

Scaturro said both SSPC and NACE have agreed that the best model will involve a hybrid structure that includes both corporate and individual membership options and combines the best of both organizations’ value propositions.

According to Scaturro, the combination of SSPC and NACE will result in two new organizations, each serving specific functions and satisfying certain non-profit requirements.

The first entity, referred to in the town hall as “New Org,” would be a 501(c)(6) organization, and the second, called “NewOrg Institute,” would meet 501(c)(3) requirements. Each organization will serve specific functions, but members will have access to both entities, and several functions will be conducted by both entities, Scaturro said.

The NewOrg Board will be a competency-based board with a maximum of 17 members, including ex-officio, serving a maximum of two consecutive three-year terms. This includes a three-member Executive Committee and Finance Committee.

The NewOrg Institute Board will be a competency and constituency-based board with up to 23 members, including ex-officio, with the same term length/number and committee structure as the NewOrg Board. The constituencies represented will include contractors, owners, suppliers, international members, consultants and committee representatives.

The Nominating Committee will sit between these two boards and will be composed of eight individual voting members, three of which must be non-U.S. members. It will include the immediate past chair of NewOrg and NewOrg Institute, along with three at-large members selected by the nominating committee, three members selected by Advisory Councils and two non-voting chairs.

Each new entity will also have the following proposed Program Committees:

A member-led study will determine the possible consolidation of current SSPC Chapters and NACE Sections to ensure geographic representation, as well, said Scaturro.

The session began with a review of the discussions to date, starting the timeline with the exploratory talks that took place between the two organizations in May 2018.

In August 2019, the organizations announced the mutual decision to bring McKinley Advisors on board as a guiding entity for the two organizations’ merger discussions. In October, SSPC and NACE board members met with McKinley CEO Jay Younger in Asheville, North Carolina.

After conducting its review of both organizations, McKinley consultants determined that a combined organization could be financially and strategically feasible.

In January, SSPC and NACE sent out a series of emailed updates to their members, which gave a future overview of update schedules, a timeline of upcoming discussion-related milestones, certification considerations and answers to some of the bigger questions involving this particular aspect of the merger efforts.

At the town hall, Scaturro played audio from the Febr. 1 meeting between SSPC Board members and Younger. When asked about the compatibility of the two organizations and the feasibility of combining, Younger replied, “it’s as high as I’ve ever seen.” He said that SSPC and NACE are “highly complementary” of one another and do not contain much overlap in offerings, and he said the spirit of the talks has been “outstanding” so far.

McKinley had reported that leading stakeholder concerns were with the potential loss of relevance or voice in a larger organization, as well as whether all certifications of both organizations would continue to be recognized and supported.

Those concerns were echoed in the first town hall, as some attendees expressed concern that painting contractors’ voices may be drowned out in a merged organization. The presenters reiterated that feedback from members of both organizations is critical, and that both organizations seek to ensure that each step of the process is member-driven and based on informed decisions.

The SSPC Board met on Feb. 1 and unanimously voted to proceed with the proposed organizational structure. The NACE Board will meet March 14; if that vote passes, SSPC and NACE members will be asked to cast a yes or no vote on a combined organization. Members will have until April 17 to respond, and current SSPC bylaws mandate that at least 5% of the total membership must vote for the measure to pass.

While Monday’s town hall was the first chance Coatings+ attendees had to speak their mind on the potential merger in-person, other opportunities to share thoughts on the potential combination will be available as the week continues.

On top of that, NACE will be holding its own town hall meetings at its annual conference, Corrosion 2020, March 15-19, in Houston.

In the meantime, both organizations encourage their members to share comments and questions regarding the process via email.