According to reports, FIGG had overseen designs for the Harbor Bridge’s main spans—which are included in the cable-supported section of the bridge that will cross the Corpus Christi Ship Channel.

Beginning in 2015, joint venture Flatiron/Dragados LLC was chosen by TxDOT for the design-build contract for the new Harbor Bridge, in Corpus Christi, Texas.

The new bridge is slated to carry U.S. Route 181 across the Corpus Christi Ship Channel off Corpus Christi Bay, replacing the current Harbor Bridge, a through arch bridge that was built in 1959. Once completed, the bridge will be the longest cable-stayed bridge in the United States. 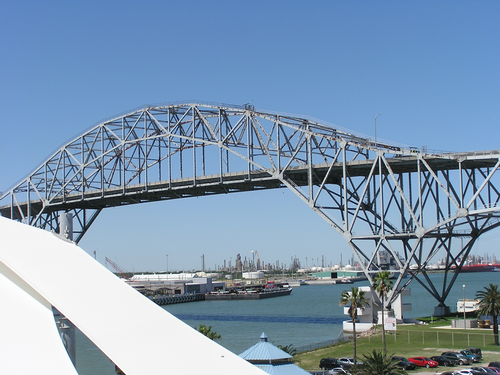 According to TxDOT at the time, the total cost of the project—including the construction of the new bridge and the demolition of the current one—would be approximately $802.9 million.

In March 2017, construction activities began on the project, and by February 2019, crews had completed concrete placement on the first lift of the south tower.

The following month, Flatiron/Dragados LLC announced that the project would likely not meet its April 2020 completion deadline. However, the first span had been put into place on the north side of the ship channel, marking a significant milestone. Company officials attributed the delay to weather conditions and permitting issues.

Last month, on Dec. 16, a crawler crane collapsed on the construction site of the Harbor Bridge replacement project. No injuries were reported, however, a segment of Brownlee Boulevard had to be closed between Leopard and Winnebago Streets.

Investigators are currently working with project contractors, supervisors and subcontractors in order to determine what caused the incident. Flatiron/Dragados LLC spokesperson Lynn Allison adds that where the crane collapsed is only a small portion of the Harbor Bridge project and won’t impact the overall schedule.

In addition to the project’s construction milestones and obstacles, TxDOT declared the suspension of design work for the Harbor Bridge project in November.

The announcement arrived after the National Transportation Safety Board released its findings related to the FIU bridge collapse in October, revealing that the probable cause was related to load and capacity calculation errors made by FIGG Bridge Engineers Inc.

FIU is home to the Accelerated Bridge Construction University Transportation Center, a multi-university center promoting ABC techniques. The pedestrian bridge was touted as an example of innovative design and construction meant to limit road closures and inconvenience stemming from the otherwise lengthy bridge construction process.

“FIGG was shocked by Texas Department of Transportation’s press release concerning FIGG’s design role on the cable-stayed main span and relating this to the construction accident on a pedestrian bridge in Miami," FIGG said in a statement.

Due to the suspension and previous delays, the Harbor project’s original completion date slated for 2021, was pushed back to early 2023, increasing the project’s total to $930 million.

Although FIGG is reportedly certified by TxDOT in bridge design, complex bridge inspection and bridge construction management, among others, the department insists that NSTB’s opinions “were significant enough” for the decision to replace FIGG.

However, in receiving comments on the matter, FIGG disputed the decision, stating, “FIGG engaged Wiss, Janney, Elstner Assoc. Inc. (WJE), the preeminent forensic engineer in the nation, to review the Florida accident. WJE’s detailed research, in-depth analysis, and physical testing shows that faulty construction of the Florida bridge—which FIGG had no hand in—was to blame for the collapse, not its design.”

Currently, there is no indication on who will actually replace FIGG or how the process will affect the project’s timeline or budget. TxDOT reports that once a replacement is found, the new firm will review and recertify the existing design.