Officials recently announced that construction on the Golden Gate Bridge suicide barrier is now two years behind schedule. The project was originally slated to open in 2021, but that date has been pushed back to 2023.

According to the San Francisco Chronicle, alleged problems with lead contractor Shimmick Construction Co. have reportedly been named the cause behind the delay. (Shimmick was acquired by AECOM two years ago.)

In December 2016, Shimmick/Danny’s Joint Venture (Oakland, California) was awarded the contract for the long-planned suicide-deterrent net project by the Golden Gate Bridge, Highway and Transportation District for $142 million. According to contract documents, the general contractor subcontracted coating work to F.D. Thomas, which was acquired by ASRC Industrial. 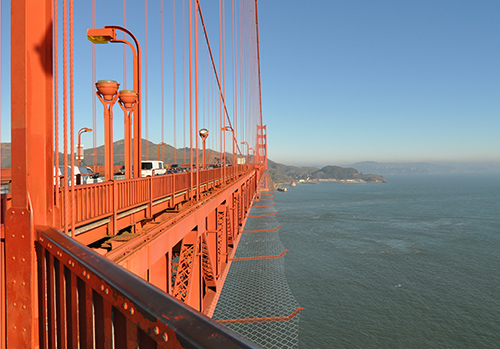 Rendering courtesy of Golden Gate Bridge Highway and Transportation District
Officials recently announced that construction on the Golden Gate Bridge suicide barrier is now two years behind schedule. The project was originally slated to open in 2021, but that date has been pushed back to 2023.

The original estimate for the job was $76 million, but during the bidding process, a low bid came in at nearly twice that, owing in part to changes made to the contract after the initial cost estimate was made. The Golden Gate Bridge Highway and Transportation District said at the time that the original specification called for a type of steel only manufactured overseas; the spec was changed after discussions with the contractors to call for American-made stainless steel of a grade sufficient to stand up to the salt-spray environment around the bridge.

The project officially kicked off in April 2017 with a ceremony commemorating the decades of community discussions and efforts to build a barrier worthy of stopping potential jumpers on the landmark’s span. The following year, in March, an announcement was made that work would finally begin, having fabrication of the stainless-steel netting and structural pieces starting offsite in May.

The net will consist of steel wires, about 5/32-inch thick, fastened to 8-inch-by-8-inch horizontal steel supports that will be cantilevered out from under the bridge. Plans include situating the net 20 feet down and 20 feet out from the deck, which stems from the idea that a fall from that height will deter potential jumpers, as jumpers would likely sustain non-fatal injuries on impact with the net. Fines will likely be instituted as well, in order to discourage recreational jumping.

First installations of the suicide barrier on the bridge were reported by local San Francisco media in August 2018. And by February of this year, four new metal protrusions could be seen along the western and eastern flanks of the Golden Gate Bridge, marking visual progress on the suicide barrier that is being installed. In May, a 300-foot mock-up was assembled in a Richmond, California-based construction yard.

General Manager of the Golden Gate Bridge, Highway and Transportation District Denis Mulligan alleged that the acquisition by AECOM resulted in distraction and turnover, which contributed to a number of projects slowing down. Mulligan also reported that the company delayed on building temporary construction platforms, as welll as designing them. There was also reported general slowness with mobilizing the job site. According to The Mercury News, reports also indicate that the contractor had not been speedy to sign on subcontractors.

Proponents of the suicide barrier project estimate that the two-year delay will result in 60 lives lost. Paul Muller, president of the nonprofit Bridge Rail Foundation, which is concerned with ending suicides at the bridge, noted his confusion with the latest delay, adding that the “thing with the contractor sounds avoidable.”

AECOM recently responded to the delay, noting that its acquisition of Shimmick had not negatively impacted the endeavor and had nothing to do with the project. Currently, the contractor is lifting steel and equipment over the side of the structure, and three lanes of traffic are closed five nights out of the week. Five platforms can also currently be found on the bridge deck, and progress is being made on a sixth.

“Quite frankly, we can’t tell from that schedule when they’ll be done,” Mulligan said. “But we’ve been looking at their durations and how much access they have and we think they could be as much as two years late.”

The delay is not expected to increase cost of construction.