$2B Vegas Stadium on Time Despite Roof Delay

Work on Las Vegas’ $2 billion Allegiant Stadium is reportedly 75% complete and running on time and on budget—despite a delay in installing the project’s massive roof.

All other tasks so far, according to stadium company chief operating officer Don Webb, have been completed well ahead of their completion dates.

In January, officials with the project announced that the stadium was one-third complete and on budget, adding that policies were put in place for the venue’s massive grass tray system and diversity performance goals were well-exceeded by contractors.

Mortenson Construction and McCarthy Building Cos., head contractors on the project, had reportedly exceeded the percentage of women and minority workers that’s required by law. 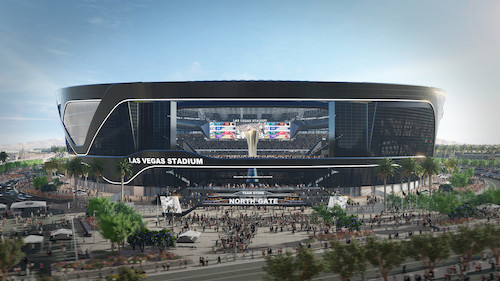 Renderings courtesy of MANICA Architecture
Work on Las Vegas’ $2 billion Allegiant Stadium is reportedly 75% complete and running on time and on budget—despite a delay in installing the project’s massive roof.

According to the Benefits Oversight Committee, small business enterprise participation was at 19%, which exceeds the goal of 15%, with $159 million of the $843 million in subcontracts awarded to firms that qualify as small business. In addition, 14 women-owned firms received contracts and 72% of those are Nevada-based businesses.

A safety plan was also OK’d for the stadium’s 9,500-ton, movable natural grass field that will be moved onto the stadium floor from outside before every game.

The 4-foot-deep tray, which will be loaded with grass, sand, gravel and irrigation and drainage components, will roll in on 13 rails through a 14-by-240-foot opening in the stadium. Powered by 76 electric motors, the move will take about 90 minutes. (Arizona’s State Farm stadium also uses this feature.)

Prior to that, a big update for the project came in October 2018, when officials announced that workers had begun installing the 52 truss columns at the site.

The 52 steel beams will frame the exterior 65,000-seat indoor stadium and ultimately hold up its translucent polymer roof, which will rise about 200 feet. The columns weigh about 65 tons each.

“In order for it to hold up the roof and hold up the enormous ring beam that ties those stainless steel cables that support the ETFE (ethylene tetrafluoroethylene, a fluorine-based polymer) roof, all of that is highly, highly precise,” Don Webb, chief operating officer of the Raiders’ construction subsidiary StadCo, told the Las Vegas Review-Journal.

Other design elements include:

In February, PPG announced that it inked a multi-year corporate marketing agreement with the Raiders team. Financial terms were not disclosed, but the agreement did include that protective and decorative coatings from PPG will be featured in the new stadium.

In July, officials announced that $40 million in additions were approved, raising the overall budget to $1.9 billion. The additions include 20 more suites and a field-level club area.

At that point, $944.7 million had been spent on the project.

In September, officials reported on the measures being taken to secure the structure against earthquakes. The Review-Journal reports that the stadium is being built with “earthquake-friendly columns and bearings” attaching the roof to the main concourse.

The columns and bearings have about a 3-inch give side to side, 4 inches vertically and 1 inch front to back.

Assembly of the net on the floor of the stadium has been in the works since August, with the cables measuring about 2 1/2 to 3 inches in diameter and some 800 feet long, weighing as much as 24 tons.

The roof raising reportedly began in October—the net is being raised by a system of hydraulic lifts, which sets the material up for a process called pinning—when the cables are attached to the rim of the roof.

Officials noted to the Review-Journal that the final pinning is one of the most challenging steps as the cables have been manufactured to within 7/8 of an inch to specifications.

The cables will eventually be raised into a crosshatch pattern 200 feet above the playing surface to support the ETFE roof.

This process, according to an early-November report, was supposed to be complete by Thanksgiving, but a recent update has pushed the date to mid-December.

Despite this, though, officials say that overall project is still on track to finish next July.

Webb recently told the stadium authority that the 80-by-215-foot lanai doors are set, planting trees and other landscaping has begun, 25 rooms inside the building have been completed and work has begun on constructing the stadium’s field tray.

According to Webb, 43,000 tasks have been placed on the completion checklist.