Last week, the Port Authority of New York and New Jersey's Board of Commissioners approved the investment of approximately $4.5 billion for projects that aim to accommodate the continued record passenger growth at three of the Port’s major airports.

According to the Port Authority's press release, passenger volumes grew by 1.9% above the 103.8 million passengers handled in 2018. Additionally, this past summer, the same three major airports collectively handled more passengers than ever recorded in the Port Authority’s history.

In addition to the airports, the money will also be used to upgrade the selected facilities to 21st Century standards and build new infrastructure such as AirTrain LaGuardia and a new AirTrain Newark, which officials say are necessary to provide travelers with a more suitable mass transit option to the airport.

“This Board takes its fiduciary responsibilities seriously and is investing money in critical airport projects that will provide the greatest benefit to our customers,” said Port Authority Vice Chairman Jeffrey Lynford. “These projects not only provide first-class facilities but will allow convenient, quick access to our airports and accommodate the phenomenal growth we are experiencing.” 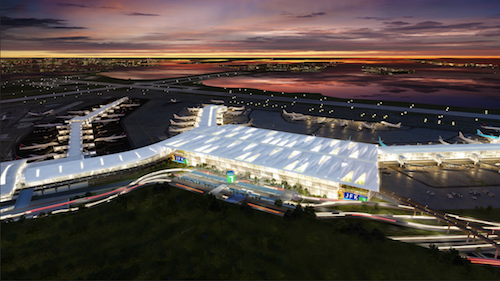 Renderings courtesy of The Office of Gov. Andrew Cuomo
Last week, the Port Authority of New York and New Jersey's Board of Commissioners approved the investment of approximately $4.5 billion for projects that aim to accommodate the continued record passenger growth at three of the Port’s major airports.

"This historic investment to modernize JFK Airport and the surrounding transportation network will not only ease travel through this major hub, but it will ensure JFK joins the ranks as one of the finest airports in the world,” said New York Gov. Andrew Cuomo.

By October, a team was tapped for the extension, led by United Kingdom-based firm duo Mott MacDonald and Grimshaw Architects, which is responsible for spearheading airport redesigns in London, South Korea, Hong Kong, Singapore, Zurich, Germany, the Netherlands, Canada, Australia and South Africa.

A year later, Cuomo announced that the new $7 billion, 2.9 million-square-foot terminal on the airport's south side would be developed by the Terminal One Group, a consortium of four international airlines—Lufthansa, Air France, Japan Airlines and Korean Air Lines. Additionally, the plan called for replacing JFK's Terminal 1 and Terminal 2 as well as the area left vacant when Terminal 3 was demolished in 2014. It would also be connected to the existing Terminal 4.

In July of this year, the Port Authority issued requests for the development of the new Kennedy Central Hub. The 14-acre mixed-use development will serve as a commercial and recreational epicenter for airport visitors, travelers and employees.

RFIs were due to the Port Authority by Sept. 6. Information received has been used to create a Request for Proposals due Nov. 6, with an anticipated Request for Qualifications expected to go out by the end of this year and the RFP to follow in the second quarter of 2020.

As a result of the Port Authority Board meeting, JFK has been approved for early action work to commence as part of its $13 billion rebuild project.

For the rebuild, the Board has authorized $445 million to assist in completing the early work items, in addition to building a new aircraft hardstand parking area. Several other early work initiatives for the project include the demolition of three obsolete buildings, the relocation of the American Airlines employee parking and the construction of airfield enhancements on the airfield’s west side cargo area.

The funding arrives in addition to the $2.9 billion from Port Authority’s 2017-26 Capital Plan already intended for infrastructure, including roadways, airfield improvements, a ground transportation center, and utilities and electrical substations use.

Construction Dive also added that the JFK project is expected to be achieved through a public-private partnership, where 90% of the project will be covered by private funds.

Already, Jet Blue has hired JFK Millennium Partners, a partnership made up of American Triple I Partners, Vantage Airport Group and RXR Realty, for the development, design and build its new 74,000-square-foot terminal. Construction is slated to begin in 2020, with the first of 12 wide-body aircraft gates ready by 2023 and substantial completion by 2025.

Cuomo announced this summer that the $8 billion LaGuardia Airport’s first new Delta terminal concourse (one of four) would open this fall. The project’s massive plan was first announced by Cuomo in July of 2015.

In following Cuomo's announcement, LaGuardia opened to the public on Tuesday, Oct. 29, revealing a modern seven-gate concourse that will total $3.9 billion once it's officially complete. The opening is just one part of LaGuardia’s new 1.2 million-square-foot, $4 billion Terminal B project.

Today @NYGovCuomo is at LaGuardia to open @Delta’s stunning new gates and concourse - all part of #AWholeNewLGA. https://t.co/hG2rHkczsl pic.twitter.com/MDcL5fG16Z

Regarding the AirTrain LaGuardia (LGA), the airport intends to connect a new station, slated to be located at Willets Point with the Long Island Railroad service, which will serve travelers going to and from New York City.

In addition to the Board’s approved $2.05 billion to develop the AirTrain LGA, they have also formally authorized an environmental review for the project.

Having outlived its lifetime since opening in 1996, the AirTrain Newark has also been selected in the Port Authority’s reassessed 2017-26 Capital Plan. Currently, the AirTrain system is reported to serve an average of 33,000 passengers per day between terminals, parking lots and rental car facilities.

For this program, the Board plans to introduce a Design, Build, Operate and Maintain contract to replace the existing 3-mile monorail system, along with authorizing $2.05 billion to develop a new AirTrain Newark to serve Newark Liberty International Airport.

The Port Authority envisions final design and construction for the project by 2021.

As for the Newark Liberty International Airport, the first redevelopment phase is reportedly already underway.

Currently, construction has commenced on the airport’s new Terminal One, while the recently authorized $35 million from the Port Authority has been slated for vision planning intended to advance master planning efforts for the redevelopment. The recent addition of funding will also help provide planning work for the development of a new Terminal Two to replace the existing Terminal B.

“Today’s actions reflect our commitment to rebuild our legacy airports and invest in new infrastructure to accommodate the unprecedented levels of air passenger growth,” said Port Authority Chairman Kevin O’Toole. “Ensuring continued progress on these projects will enable us to provide 21st century facilities that offer the world-class customer experience our passengers expect.”