The deep energy retrofits follow the initiatives set by the Climate Mobilization Act that passed this last spring and aim to reduce energy usage by 50% or more and reduce carbon emissions by 30% or more.

In April, New York City council approved a package of bills and resolutions—known as the Climate Mobilization Act—intended for radical energy efficient improvements. The act requires that all new residential and commercial buildings in the city have green roofs made up of either plants, solar panels or small wind turbines—or a combination of all three. 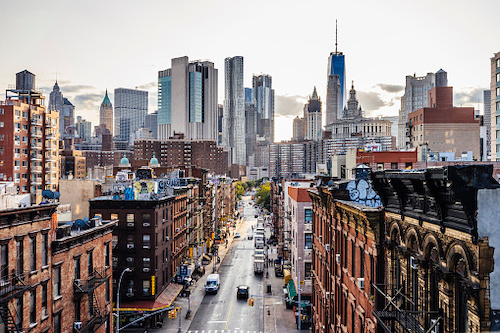 Unlike other trending cities who only a require a traditional 25% to 50% coverage, New York City’s standard calls for 100% total green roof coverage.

“It’s important for New Yorkers to know that green roofs are going to play a major role in making our city a more livable city from lowering the temperatures of our communities to improving air quality across the city,” said councilmember Rafael Espinal.

The green roof legislation came in on the heels of de Blasio’s release of $14 billion act, OneNYC2050—Building a Strong and Fair City. That legislation plans to cover new buildings, as well as those undergoing major renovations, and plans to cut the city’s greenhouse emissions by 30% by 2030.

There are two major parts of that initiative that impact the building and construction industry. Those include:

The retrofitting of thousands of buildings statewide was estimated to cost $4 billion.

By June, New York Gov. Andrew M. Cuomo and legislative leaders announced the passing of Senate Bill S6599, which sets a net-zero emissions economy goal by 2050. The legislation is one of the United States’ most aggressive climate change action plans to date.

In a vote 41-21, the Climate Leadership and Community Protection Act requires that New York reduces its emissions 85% below 1990 levels by 2050 and offset the remaining 15% by removing carbon dioxide from the atmosphere through planting trees, greening infrastructure and investing in proper technology.

In order to achieve the bill’s goal in steps, the legislation set an initial goal for the state to produce 70% of its electricity from renewable sources such as hydropower, solar and wind by 2030. According to The New York Times, the state already produces about 60% of its electricity through carbon-free sources, mostly made up of nuclear power plants, hydroelectric dams and small amounts of wind and solar.

Guided by the Department of Citywide Administrative Services’ audits of city facilities comprising of 10,000 square feet and larger to pinpoint areas of high-energy usage that could be more efficient, the DCAS is collaborating with identified facilities to design and implement the retrofits.

The City of New York will start deep retrofits on 9 buildings, aiming to slash energy use by over 50%! According to Urban Green CEO @JohnMandyck, these retrofits will set a path forward for all building owners. Read more in @smartcitiesdive @Jason_Plautz https://t.co/bWcqrxGFIu

According to New York City’s Roadmap to 80 X 50—a published guide for New York City’s goal to reduce greenhouse gasses 80% by 2050—the DCAS has already completed over 1,000 energy efficient and clean energy projects across 675 buildings. The efforts are reported to have reduced greenhouse gas emissions from city-owned buildings by an estimated 120,000 metric tons of carbon dioxide equivalent annually.

"Here in New York City, we recognize our climate crisis for what it is—an emergency—and also that what matters most is not words, but action," said Daniel Zarrilli, NYC's Chief Climate Policy Advisor and OneNYC Director.

"By retrofitting City facilities, we are demonstrating to the world the tangible steps that can be taken at the local level to confront our climate crisis. These bold actions announced today show the progress we are making on the commitments laid out in OneNYC 2050 as we continue building a strong and fair city for all New Yorkers."

Of the nine facilities selected for this round of building retrofits, the structures include:

In conducting the deep energy retrofits, depending on the structure, practices can include improving the building’s insulation; adopting increased natural daylight designs; better ventilation systems; upgrading electric fixtures; automating control of heating and cooling systems; and even the installation of solar panels capable of generating 100 megawatts of energy.

The nine retrofitting projects are slated to be completed by 2025 to help achieve the goals established by Local Law 97 of the Climate Mobilization Act.

"The City of New York and the Department of Citywide Administrative Services continue to lead by example with deep energy retrofits of City facilities,” said Richard Yancey, FAIA, Executive Director of the Building Energy Exchange.

"These retrofits will not only significantly reduce the energy use and carbon emissions of the buildings in question, but can serve as direct models for the private sector. Having worked closely with DCAS on deep retrofit training for their staff and several case studies of innovative projects completed in public facilities the Building Energy Exchange looks forward to working with the City to ensure that the critical solutions deployed in these deep energy retrofits are widely shared with all building industry stakeholders."