The inaugural dinner meeting was held at Rockefeller’s Grille in McKees Rocks, Pennsylvania.

Kicking off the meeting was Chapter Secretary, Andrew Croll. As an introduction, Croll started with the association’s goal of a new chapter and the steps that were needed in order to make a chapter in Pittsburgh (where SSPC is headquartered) come to life.

“We all had a one-minded goal: to better the industry in the Pittsburgh region, for many chapters throughout the world, each one with their own area, their own climate and their own individual structures,” Croll said. “And with 446 bridges in Pittsburgh, why wouldn’t we have one? That’s a hell of a lot of steel.”

“We come from all walks of the paint industry: the union side, contractors, engineers, architects, manufacturers and specialty firms, and most importantly the men and women in the field who adhere to the industry standards we create. We were able to bring everyone together to form this chapter, and we’re all excited and look forward to the future.” 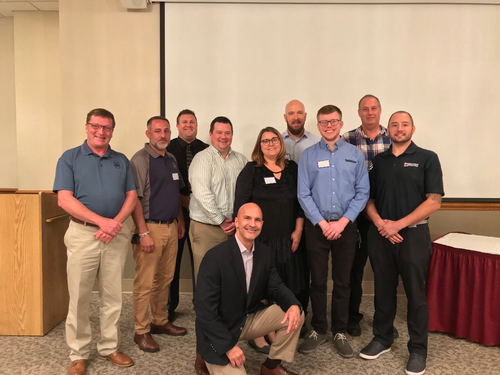 Members and attendees were informed and encouraged to join one or more of the four Steel City Chapter Committees as well. Chapter committees and duties include:

Serving as the event’s key speakers were Bill Worms, SSPC Executive Director and W. Doni Riddle, Senior Vice President of Sales for the Protective and Marine Coatings Division of The Sherwin-Williams Company and President of the SSPC Board of Directors.

Covering one of the most prominent topics in the industry, the two went over the timeline of the potential SSPC and NACE merger, which began in May 2018 when the SSPC board first approved moving forward with the idea. Over the course of that year, officials from both associations sought legal counsel, hosted board discussions and discussed best practices if the merger were to move forward.

By March of this year, SSPC and NACE officially announced the beginning of discussions regarding “synergistic opportunities” between the professional associations. In August, the associations announced its mutual decision to bring McKinley Advisors on board as a guiding entity for the two organizations’ merger discussions.

On Oct. 29, a NACE board meeting with McKinley CEO and two SSPC board members is expected to take place in Asheville, North Carolina. The merger task group is planning to schedule additional face-to-face meetings later this year or by January 2020.

Although there are still many questions unable to be answered at this time, Worms covered the guiding principles for the merger, informing attendees that, “I think it’s important for all of you to understand, we’ve set some guiding principals that we have to have … One of the big concerns SSPC members have and the staff have is we don’t want to lose our voice.”

To protect that voice, the first guiding principle is to create a merger of equals, while other principles include:

Riddle also added, “One additional thing, if you look at all the value that’s out there, between the two organizations coming together, there’s a lot of good things from the SSPC organization that NACE doesn’t have and vice versa what NACE has. So, we are looking at where we can combine those two … how we can combine those two where the overall membership is getting something more of value than you’re getting today.”

In closing, Blyzwick informed attendants that SSPC’s 2020 Training Brochure would be mailed out by the middle of this month with new e-course bundle packages and discounts. All 2020 Public Offered classes are slated to be available online by November.

Additionally, registration for the Coatings+ 2020 conference has also recently opened.

Anyone interested in the SPPC Steel City Chapter or becoming a member, please visit: sspc.org.