Danish wind energy firm Ørsted, in charge of constructing what will be world’s largest offshore wind farm, Hornsea Project One, recently reported that the project was nearly finished and on track for the 2020 completion date.

The project is slated to put the U.K. closer to its 2030 goal of deriving a third of its electricity from offshore wind, and is expected to provide energy to more than 1 million U.K. homes, totaling 1.2 gigawatts of energy output annually.

According to Ørsted, the project’s timeline started in 2010 when SMart Wind Ltd—a joint venture between Mainstream Renewable Power and Siemens Project Ventures GmbH—was awarded the “Hornsea Zone” by the Crown Estate as part of the Offshore Wind Round 3 Program. The following year, DONG Energy acquired a 33.3% stake in Hornsea Project One from SMart Wind.

Between 2012 and 2013, various consultation events took place in local communities to determine the environmental and local impacts the project would have on the surrounding area. Following discussions, Hornsea Project One was awarded a Final Investment Decision Enabling Contract for Difference by the Department of Energy and Climate Change in 2014. The Development Consent was granted by the Secretary of State. 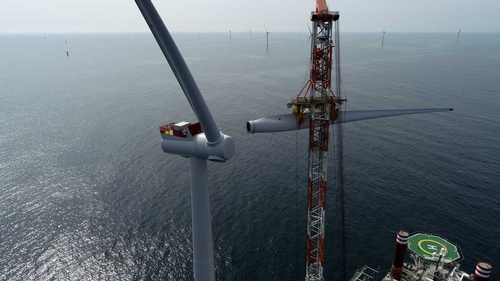 Ørsted
Danish wind energy firm Ørsted, in charge of constructing what will be world’s largest offshore wind farm, Hornsea Project One, recently reported that the project was nearly finished and on track for the 2020 completion date.

In 2015, DONG Energy received full ownership of Hornsea Project One from SMart Wind and in 2016, onshore construction for the project began.

By February 2017, Wilton Engineering Services Ltd. was named the company responsible for portions of the construction of the structures, including coating applications.

The following month, the Vindeby wind farm began its decommissioning process, a straightforward decision by DONG Energy as the many factors of the wind farm had become worn. Vindeby was the world’s first offshore wind farm and operated for 25 years.

By February 2018, the first monopiles for Hornsea Project One were installed 74 miles off the coast of Yorkshire, England, marking the beginning of offshore construction. Installation was reportedly being carried out by GeoSea’s installation vessel, Innovation, which is equipped to carry four monopiles at a time. Each one is 213 feet long, weighs around 800 tons and is 26 feet in diameter. Once completed, there will be 174 monopiles total covering 407 square kilometers (157 square miles).

Innovation was also to be used to install some of the project’s transition pieces. The vessel is capable of carrying 31,400 tons and 100 people onboard and is also a self-elevating ship that can extend four legs down to the ocean floor, noted CleanTechnica, making it an offshore installation platform.

Ørsted also announced the selection of Siemens Gamesa Renewable Energy as the exclusive wind turbine supplier for Hornsea Project Two, a successor to Hornsea Project One slated to be operational by 2022.

“The Siemens Gamesa factory in Hull has already been producing blades for our Race Bank and Walney Extension and will produce the majority of blades for Hornsea Project One. This selection paves the way for more, and even larger, U.K.-made blades at a U.K. offshore wind farm, underlining this country’s world-leading position in the sector.”

In March, the A2Sea vessel Sea Installer was reported to join the project’s efforts.

Roughly a year later, The Guardian reported that Hornsea Project One had begun supplying energy to the U.K. electricity grid. The first two phases of the project will use 7 MW turbines, though later portions of the Hornsea development may use 10-MW-plus turbines.

With Hornsea Project One is nearing its completion, Ørsted reports it will have invested 12 billion euros ($15 billion) in the sector by the 2020 date, which has yet to be determined. Once up and running, Hornsea One will generate nearly twice the power of Ørsted's Walney Extension—the current largest offshore wind farm in the world, located in the Irish Sea.

Since changing its name from Danish Oil and Natural Gas to reflect its transition to green energy in 2017, Ørsted has cut its use of coal by 73% since 2006 and plans to be coal free by 2023. To date, the company has built 25 offshore wind farms across Europe, the United States and Asia, however the United Kingdom is reported to be the biggest market for offshore wind.