Earlier this week, the San Francisco Board of Supervisors unanimously approved legislation that will transition private commercial buildings of 50,000 square feet and larger to 100% renewable electricity by 2030.

The legislation is part of Mayor London N. Breed’s vision of an “all-electric City” in which 100% renewable electricity replaces the use of fossil fuels in the building and transportation sectors. According to the mayor’s news release, roughly half of the city’s emissions come from buildings, and a significant portion of those emissions are released from the commercial sector.

Breed first unveiled the plan amending San Francisco’s existing environment code for all non-residential buildings on Earth Day this past April—a plan similar to New York City’s Climate Leadership Bill. However, instead of cutting emissions from the city’s largest buildings, San Francisco would opt to specifically require buildings to run on electricity generated by 100% renewables, a first for U.S. cities. 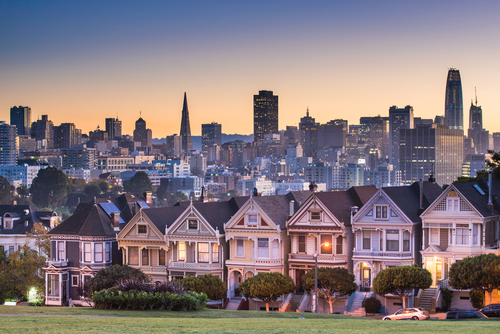 HaizhanZheng / Getty Images
Earlier this week, the San Francisco Board of Supervisors unanimously approved legislation that will transition private commercial buildings of 50,000 square feet and larger to 100% renewable electricity by 2030.

In following the announcement, Breed directed the Department of the Environment to create a public-private task force to determine a process for all buildings to go electric.

“San Francisco has always been a national leader when it comes to sustainability, but we know that the reality of climate change requires us to go further,” said Breed. “Transitioning our large buildings to 100% renewable energy is an important step to continuing the progress we have made with CleanPowerSF towards making San Francisco an even more sustainable city.”

In implementing the new legislation, the city is expected to reduce 21% of emissions from commercial buildings by 2030, when the entire city aims to run on 100% renewable electricity. Of the city’s total emissions, buildings and transportation are estimated to make up about 90%, respectively.

Because the plan is based on a building’s size, the timeline to go fully renewable is as follows:

Already, San Francisco reports that the city has reduced its greenhouse gas emissions 36% in comparison to its 1990 levels. San Francisco was also ranked as one of the top five cities for clean energy in July 2019 by the American Council for an Energy-Efficient Economy, a nonprofit that promotes efficient energy policies.

The Courthouse News Service reports that the ordinance, co-sponsored by Supervisors Vallie Brown, Ahsha Safaí, Aaron Peskin, Matt Haney, Rafael Mandelman and Hillary Ronen, requires one more vote by the Board of Supervisors and the mayor’s signature before it can officially become law.

“To achieve our goal of net zero emissions by 2050, we need to use less energy, and we need a cleaner renewable energy supply,” said Supervisor Vallie Brown. “We must change, we will change.”

In the meantime, the Department of the Environment’s created task force is slated to determine a road map for decarbonization for buildings by early 2020.