After the termination of the $1.8 billion private-public partnership contract with Great Hall Partners over the Jeppesen Terminal renovation at Denver International Airport, updates to the project’s budget and schedule have been revised.

Roughly two years ago in November 2017, DIA proposed the addition of 39 gates in an expansion project, up seven from the airport’s original proposal of 26. At the time, the project was estimated to cost $1.5 billion and would be a P3 headed by Ferrovial Airports. The overall deal was slated to include a $650 million terminal renovation, which would be overseen by Saunders Construction over the course of four years. (Cost estimates for the actual expansion at the time were not yet available, however.)

A couple months later in January, two subsidiaries of Hochtief, a Germany-based construction company, were announced as the companies to oversee the estimated $700 million expansion. The companies, Turner Construction and Flatiron Construction, would be building two new hubs for the airport, with the capacity for three more, as well as 16 new gates and installing additional pavement. 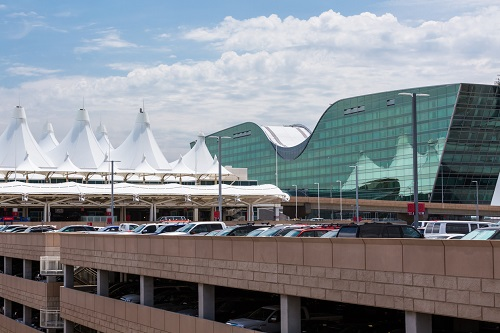 © iStock.com / arinahabich
After the termination of the $1.8 billion private-public partnership contract with Great Hall Partners over the Jeppesen Terminal renovation at Denver International Airport, updates to the project’s budget and schedule have been revised.

However, first delays struck in Feb. 2019 when concrete on the main floor was found to be weaker than expected. According to officials, early testing of the concrete’s compressive strength was lower than what the project’s plan specified, so the area followed up with intensive testing. The DIA also noted that the testing needed to be complete prior to cranes going onto the main floor to erect steel.

At the time of the announcement, DIA was reported to owe Great Hall Partners at least $200 million in reimbursements for the financing it provided for the start of the airport renovation project, a total termination fee was still being negotiated between the two.

In concluding the recent events, Day has expressed to reporters that although the airport must go through another procurement process, she hopes to stay close to original budget, choosing to use a $120 million contingency fund. The project scope may face edits to meet the budgetary goals.

In approving the use of contigency funds on the Jeppesen Terminal renovation, the project's budget has been increased from its orignal estimation of $650 million to $770 million.

According to Day, subcommittees and steering groups are working to process the closing of GHP’s contract and settling associated claims so that the contractor can successfully vacate the property by Nov. 12. Although a 34-year concession deal was included in GHP's contract, Day has also confirmed that the DIA will run that component themselves after the renovation is complete.

It is also noted that although the new $770 million budget fails to include GHP's termination fees, a recent report from Moody's shows that the airport is in a decent financial position to captivate those costs.

Currently, the DIA is also working to procure a new program manager, contractor and designers as well as working with airlines to modify the existing design. Day confesses that the process might result in the elimination of some concessions and other features but won’t be “taking away from the passenger experience." Still, all stakeholders at DIA will provide input to the final project features.

Replacement construction contracts and design teams are slated to be ready this fall, but no specific project delivery method has been specified at this time.