Reported this summer, the Department of Energy’s Blade Reliability Collaborative and Sandia National Laboratory have been researching how to noninvasively inspect wind turbine blades for visible and hidden damages in a faster, more detailed way then traditional human inspections with cameras.

Once properly developed, flying and crawling robots or drones will be outfitted with special scanners that will aid in lowering the cost of wind energy at a time when blades are being more produced, larger in size, harder to transport and, not to mention, pricier.

In drawing on expertise from avionics and robotics research, Sandia has drafted two different projects in an effort to help to catch blade damages more quickly.

Current wind blade inspection methods are timely and are usually comprised of either sending an inspector out with a camera and telephoto lens—where the inspector can move from blade to blade, taking photos and looking for obvious signs of damage, cracks and erosion—or the second option, which involves an inspector rappelling from a wind tower or riding on a crane-controlled platform, where visual inspections can take place that way instead. 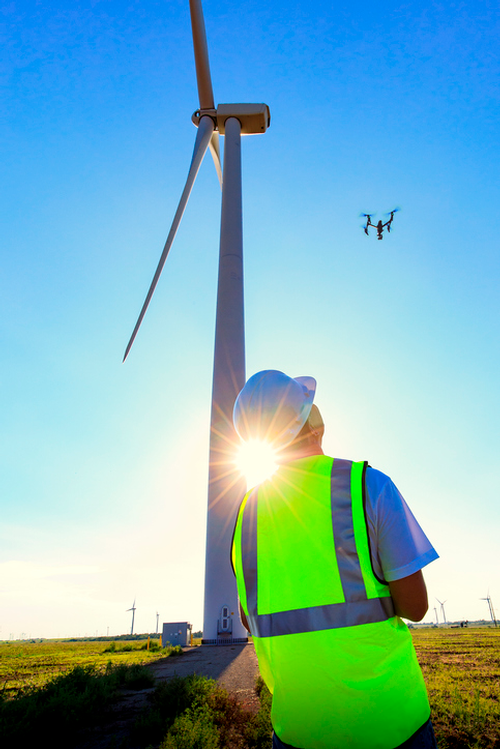 KSwinicki / Getty Images
Reported this summer, the Department of Energy’s Blade Reliability Collaborative and Sandia National Laboratory have been researching how to noninvasively inspect wind blades for visible and hidden damages in a faster, more detailed way then traditional human inspections with cameras.

“In these visual inspections, you only see surface damage,” Joshua Paquette, a mechanical engineer in Sandia’s wind energy program says. “Often though, by the time you can see a crack on the outside of a blade, the damage is already quite severe. You’re looking at an expensive repair or you might even have to replace the blade.”

One solution to quicker and more reliable wind blade inspections that researchers have been working on involves outfitting a crawling robot with a scanner that’s capable of viewing damage located inside a wind blade. In another set of projects, the team has paired drones with sensors that use heat from sunlight to detect a blade’s damages.

The technology was inspired by machines more commonly used for dam inspections, allowing a robot to move up and down, as well as from side-to-side on a wind blade. While in motion, the attached cameras take a series of photos that are then matched together, forming a high-fidelity image of the blade. From the images, inspectors can then locate any small demarcations, as well as subsurface and surface damage.

In addition to the images, the crawling robot is also fitted with a wand scanner that seeks damage using phased array ultrasonic imaging. Much like an ultrasound machine, the scanner can detect internal damage through changes in the ultrasonic signatures.

“Impact or overstress from turbulence creates subsurface damage that is not visible,” said Sandia senior scientist and robotic crawler project lead Dennis Roach. “The idea is to find damage before it grows to critical size and can be fixed with less expensive repairs that also decrease blade downtime. We want to avoid any failures or the need to remove a blade.”

As for the drone solution, more commonly known as thermography, it uses infrared cameras that use the sunlight’s heat to detect hidden damages as well. This technology is reported to detect damages up to a half-inch deep within the blade.

“We developed a method that heats the blade in the sun, and then rolls or pitches the blade until it is in the shade,” Sandia mechanical engineer Ray Ely says.

“Sunlight diffuses into the blade and equalizes. As that heat diffuses, you expect the surface of the blade to cool. But flaws tend to disrupt the heat flow, leaving the surface above and flaws hot. The infrared camera detects those hot spots and labels it as detected damage.”

In another study, like the crawling robot, a drone was also equipped with a lidar sensor—a technology like radar that uses visible light instead of radio frequency waves—and took images while it moved, ultimately gathering a super-resolution image. Reportedly, the imaging helps researchers to precisely track where a blade is damaged and measures erosion found on the blade’s edges.

“I can envision each wind plant having a drone or a fleet of drones that take off every day, fly around the wind turbines, do all of their inspections and then come back and upload their data,” Paquette says.

“Then the wind plant operator will come in and look through the data, which will already have been read by artificial intelligence that looks for differences in the blades from previous inspections and notes potential issues. The operator will then deploy a robotic crawler on the blade with suspected damage to get a more detailed look and plan repairs. It would be a significant advance for the industry.”

Outside of wind infrastructure, many other companies and entities have reported using drones as a new form of inspection technology as well, with some reporting the use as early as 2016.

In 2017, PaintSquare Daily News reported that coatings manufacturer AkzoNobel had announced a partnership with an oil and gas tanker operator and drone developer, Barrier Group and DroneOps, to create a drone that would allow for remote inspections of enclosed spaces and ballast water tanks.

By June of this year, it was also reported that Japan-based ready-mix and precast producer Aizawa Concrete Corporation partnered with aerospace company Top Flight Technologies Inc. (Boston) in an effort to utilize its robotic technology for inspections needed to maintain various concrete roads, bridges and infrastructure.

Also reported this year, both the U.S. Department of Labor’s Occupational Safety and Health Administration and Federal Aviation Administration approved the use of drones for inspections over construction sites.

Outside of the quickly growing popularity of drones in coating and inspection industries, artificial intelligence is also recently reported to be making strides to detect and even predict coating corrosion. As reported by Riviera—a joint development AI project between class society ABS and a Singapore-based university—would be used to identify and detect anomalies in a ship, vessel, offshore structure and quality of coatings from photographic data.

Over time, the technology will collect images of the same areas of coatings, making it possible to eventually make predictions based on its likely evolution.