In a recent study at Rutgers University (Brunswick, New Jersey), a team of engineers have found that special permeable concrete pavement can help to reduce the urban heat island effect.

The study has since been published in the Journal of Cleaner Production.

In a Rutgers press release, the university reports that most urban areas see more than 30% of impermeable pavement coverage, usually made of either concrete or asphalt. This type of concrete is known to reach up to 140 F during the summer months and in larger cities hosting 1 million or more people, temperatures can show 1.8-5.4 degrees higher than rural areas and up to 22 degrees higher in the evenings.

According to the U.S. Environmental Protection Agency, the heat increases not only pose human health risks and harmful surface runoff, but can peak the demand for energy in the summer, ultimately increasing the costs of air conditioning, air pollution, greenhouse gas emissions, heat-related illness, deaths and water pollution.

When comparing impermeable to permeable pavement, the latter was first used in green infrastructure, helping to reduce stormwater runoff and flooding in urban areas. Currently, the concrete is more commonly used for sidewalks, parking lots and rest areas since it isn’t as durable as impermeable.

In hopes of creating a stronger permeable concrete product, a Rutgers-led team of engineers is studying how to design a product specifically for heavy traffic and urban streets. According to the press release, the team has designed a pavement made up of large connecting pores. 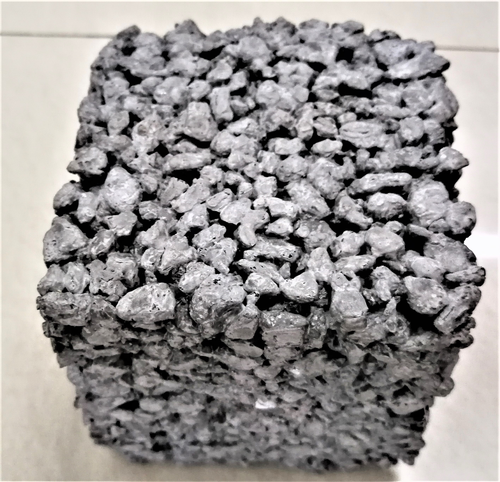 Rutgers University
In hopes of creating a stronger permeable concrete product, a Rutgers-led team of engineers is studying how to design a product specifically for heavy traffic and urban streets.

Studies show that not only will water draining through the pavement help to reduce the heat of the concrete, but that water evaporated in the pores will also reduce the pavement’s surface temperature. Additionally, the permeable concrete also reflects heat better than when compared to asphalt pavement.

“Highly efficient permeable concrete pavement can be a valuable, cost-effective solution in cities to mitigate the urban heat island effect, while benefitting stormwater management and improving water quality,” said Hao Wang, an associate professor in the Department of Civil and Environmental Engineering in the School of Engineering at Rutgers University–New Brunswick. Wang is also a corresponding author of the study and an affiliated researcher at the Center for Advanced Infrastructure Transportation.

Although the Rutgers study found that permeable concrete pavement gives off slightly more heat on sunny days compared to conventional pavements, after rainfall the permeable product showed 25- 30% less heat than its competitor. Engineers from the university then improved the pavement’s high thermal conductivity—the ability to transfer heat to the ground more quickly—reducing the heat between another 2.5- 5.2%.

In a separate study, the team also found that by adding fly ash and steel slag to the permeable concrete not only reduced the cost, but also reduced energy consumption and greenhouse gas emissions linked to raw materials.

The lead authors of the studies are Jiaqi Chen, a former postdoctoral researcher at Rutgers, and Xiaodan Chen, a Rutgers doctoral student. Co-authors include: Professor Husam Najm and engineering researcher John Hencken at Rutgers, and collaborators from the New Jersey Department of Transportation and Central South University in China.