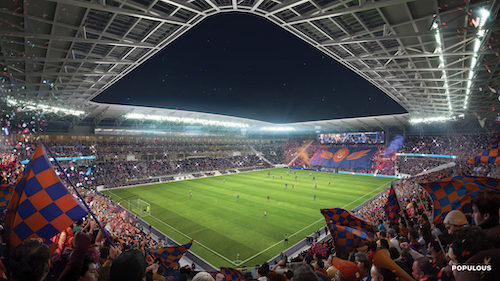 “We are so proud of this incredible design that Populous has delivered to FC Cincinnati,” said the team’s CEO and managing owner, Carl H. Lindner III.

“It has been so well-thought and concepted, so carefully crafted. We believe it will stand as a true icon and unifying force in our city. Our deep passion for FC Cincinnati is to create a legacy in this city, contribute a positive impact on our community and help raise the profile of Cincinnati not only nationally, but also around the world. We believe that soccer, as the world’s game, is a true unifying force and can bring our region closer together. West End Stadium provides us a remarkable platform to continue pushing those goals even further and enhance our impact not only locally, but across the globe.”

The stadium, which will be among the largest in the country for the MLS, will house FC Cincinnati and seat 26,500 (with the ability to increase to 30,000), costing an estimated $250 million. The project is being bankrolled by privately by the club’s local ownership group.

In March, the team announced that it had replaced Meis with Populous, with the project being led by Jonathan Mallie, Senior Principal and Director of the New York office.

That group’s renderings were released in November and featured a canopy roof and a facade to be clad with ethylene tetrafluoro-ethylene foil technology, which would permit the whole building to shine with color-changing LEDs.

The biggest change is at the roof. The 360-degree canopy roof will now use 513 vertical fins that will house 2.5 miles of what officials call a “one-of-a-kind” LED lighting system that will allow motion sequences to be displayed on the stadium’s east-facing facade.

Other external features include:

The stadium is still slated to open in March 2021.