Protective Seawalls Could Cost Coasts $416B

In a recent report by the Center for Climate Integrity—a project of the Institute for Governance and Sustainable Development—in partnership with engineering firm Resilient Analytics, various U.S. coastal communities are expected to pay $416 billion in seawall protection services over the next 20 years.

The CCI study was published with analysis by lead scientist Paul Chinowksy, director of the environmental design program at the University of Colorado Boulder and chief executive of the firm Resilient Analytics. 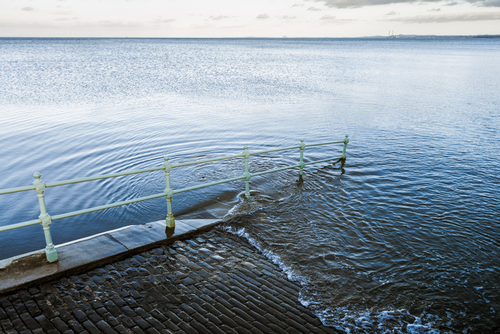 georgeclerk / Getty Images
In a recent report by the Center for Climate Integrity—a project of the Institute for Governance and Sustainable Development—in partnership with engineering firm Resilient Analytics, various U.S. coastal communities are expected to pay $416 billion in seawall protection services over the next 20 years.

Through mapping and the work of geodata specialists from the University of Colorado and Resilient Analytics, the team produced two different carbon-emission scenarios resulting in the groundbreaking study, “High Tide Tax: The Price to Protect Coastal Communities from Rising Seas,” a first of its kind that includes rankings of estimated sea-level rise adaptation costs by city, county, congressional district and state.

The baseline costs are based on moderate sea-level rise projections under the U.N. Intergovernmental Panel on Climate Change scenario for moderate levels of pollution. Within the scenario (known as Representative Concentration Pathway 4.5), emissions are expected to peak by 2040, including yearly storm surges, and then is expected to decline.

Additionally, in a study conducted by the University of Maryland Center for Environmental Science, sea levels are predicted to rise about 7 inches by 2030 and over a foot by 2050.

According to the CCI report, more than 50,000 miles of coastal barriers will be necessary in 22 states by 2040, resulting in over $1 billion in construction efforts in 132 counties and over $10 billion in 14 states. The top 10 state rankings are as follows:

Complete rankings for the U.S. can be found here.

However, because the calculations are more conventional, researchers warn that reality could prove to be much worse.

“Sea levels could easily rise more than the estimates used in the study; they are very unlikely to rise less. And many localities will protect for more damaging storms than the modest one-year storm surge used in this analysis.”

Already, the price tag for more vulnerable areas in the nation are making it seem easier to abandon some waterfront communities vs. having taxpayers foot the seawall bill, a price that is reportedly going to cost some 24 communities over $100,000 per person.

According to Chinowsky, the price tag is just “a small portion of the total adaptation costs these local and state governments will be forced to finance,” as it fails to include the costs of stormwater rehabilitation, drinking water systems, mitigation and other recovery costs. The estimates also fail to include frequently flooded areas.

As questions regarding who will pay for the seawall infrastructure over the next 20 years, Richard Wiles, Executive Director of the CCI, expects that people will be paying for the climate crisis much earlier than expected.

In opposition of using the taxpayer's dollar, the CCI’s central goal is to “accelerate corporate and governmental policy changes that speed the energy transition from fossil fuels to clean energy sources and that otherwise contribute to a safe climate.” In order to reach this goal, the organization aims to require fossil fuel producers to pay for the damages caused by their products.

“The companies that made and promoted the products that they knew would irrevocably and radically alter the global climate, and then denied it, must pay their fair share to help communities adapt to it,” added Wiles. “Failing to hold polluters to this basic responsibility would be to knowingly bankrupt hundreds of communities, standing idly by as they are slowly and inexorably swallowed up by the sea.”

According to The Baltimore Sun, Baltimore’s municipalities are already on the case, filing climate liability lawsuits against more than two dozen oil and gas companies. On Staten Island in New York, the city is also planning a $615 million, five-mile seawall to withstand a 300-year storm.

PaintSquare Daily News recently reported that the North Carolina Department of Transportation Ferry Division was also beginning to prepare by releasing plans to build a 1,000-foot-long sheet pile wall along the north tip of Ocracoke Island in order to protect the site.