Part of $8B LaGuardia Work to Open in Fall

New York City’s $8 billion LaGuardia Airport overhaul will soon see a major milestone: According to the office of Gov. Andrew Cuomo, the first new Delta terminal concourse (one of four) will open in the fall.

"This new milestone in LaGuardia's transformation brings us another step closer in converting the airport into a world-class flight hub in line with New York standards," Cuomo said.

"Our collaboration with Delta in the development of this concourse and the new LaGuardia terminal is another demonstration of the effectiveness of public-private partnerships at work to modernize our state's infrastructure." 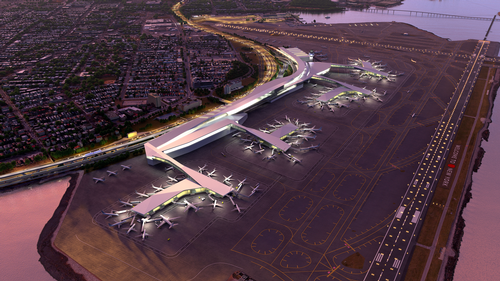 Images: New York State
New York City’s $8 billion LaGuardia Airport overhaul will soon see a major milestone: According to the office of Gov. Andrew Cuomo, the first new Delta terminal concourse (one of four) will open in the fall.

Partners in the project include the Port Authority of New York and New Jersey, LaGuardia Gateway Partners (LGP) and Delta Airlines—who are both planning on leasing their terminals from the Port Authority until 2050. LGP is composed of a number of firms, including:

The work is also going on while the airport maintains full operations, which means accommodating 100,000 passengers on its busiest days.

Delta’s $4 billion part of the project takes place at Terminals C and D and began in 2017.

To date, Delta's construction features 2,000 tons of steel, more than 50,000 cubic yards of concrete and more than 40 miles of piping, cabling and other infrastructure.

Terminal B is taking up the other $4 billion. (Its first 18-gate new concourse opened last December.)

"LaGuardia Airport is undergoing this massive redevelopment to ultimately offer travelers a world-class facility that New York deserves, and the opening of Delta's newest concourse at LGA will be an important next step," said Rick Cotton, Executive Director at The Port Authority of New York and New Jersey.

"Gov. Cuomo's vision to transform this facility into a state-of-the-art airport is well on its way and we look forward to many more momentous milestones ahead."