In the Great Hall Partners’ most recent report—a consortium of companies performing the $650 million renovation of Jeppesen Terminal at Denver International Airport—it has been announced that the project won’t be complete until at least 2024, three years behind its 2021 deadline.

The companies (Ferrovial Airports, Saunders Construction and JLC Infrastructure) claim the delay is due to various airport-requested design changes and structural issues found in old concrete initially used for the airport’s construction.

In November 2017, the DIA proposed the addition of 39 gates, an expansion from its original proposal of 26. According to The Denver Post, the gate-expansion project was estimated to cost $1.5 billion and would serve as a part of a public-private partnership headed by private partner Ferrovial Airports, with a four-year, $650 million terminal renovation overseen by Saunders Construction.

Overall, the Jeppesen Terminal project is part of a $1.8 billion deal struck with Great Hall Partners. 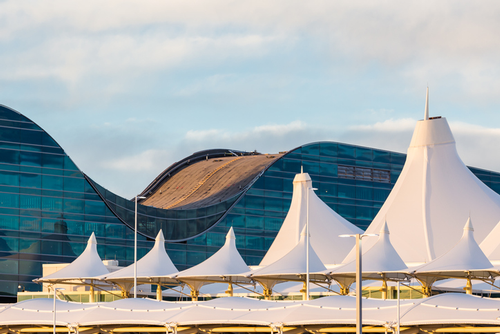 Post
In the Great Hall Partners’ most recent report—a consortium of companies performing the $650 million renovation of Jeppesen Terminal at Denver International Airport—it has been announced that the project won’t be complete until at least 2024, three years behind its 2021 deadline.

For the airport’s expansion, DIA officials are looking to expand the current traveler capacity—which stands at 50 million annually—to 80 million. In 2016 alone, 53.8 million travelers passed through the DIA.

At the time, the DIA had 107 regular gates and 42 “apron load” positions, according to the Post. The apron load area allowed passengers to board smaller planes on the tarmac. The proposed expansion would increase the total of regular gates by 36%.

The airport serves United, Southwest and Frontier, along with smaller airlines.

A little over a year later, two subsidiaries of Hochtief, a Germany-based construction company, were selected to oversee the expansion project. Around the same time, Turner Construction and Flatiron Construction were awarded the work for the construction of the two new hubs, 16 new gates and the installation of additional pavement—making up one of four deals. Concourse A will expand by 530,000 square feet, and Concourse B will see the addition of 91,000 square feet.

Small businesses will perform 18% of the design work on the project, and up to 24% of the construction work.

By July 2018, an airport construction timeline was released as renovation kicked off, revealing a 30-year plan of private oversight of expanded terminal concessions as provided by the Great Hall Project partnership. The expansion project was expected to be complete by 2021 through a series of four phases.

In February of this year, work at the airport faced what could extend to a 10-month-long delay after finding that the concrete in the main floor was weaker than expected. At the time the project was still in Phase No. 1, which was originally slated to run to the summer. In this phase, the plan was for workers to tear down walls and extend the “floor plate” of the upper level by about 30 feet into the atrium. Baggage offices on Level 5 were also set to be redone.

However, according to spokesperson Stacey Stegman, the issue could not be fully known or realized until April when the testing was completed and the airport was able to review and analyze the results.

After the release of the Great Hall Terminal’s schedule update, redevelopment is slated to be 931 days, or 30 months, behind schedule. However, Channel 4 CBS Denver says that the project’s full completion could extend to 2025—with costs projected to increase by nearly 50%, or $311 million.

According to Colorado Public Radio, taxpayers won’t have to pay the difference directly, as it is funded by airline fees, concession and parking revenues, in addition to the DIA keeping its finances separate from the city budget.

“Of course we are disappointed and frustrated,” Denver Mayor Michael Hancock said.

“We are doing everything possible to ensure the safety of the airport, and working hard to continue to keep the project moving so that we can keep our airport one of the best in the world.”

In addition to staking the blame on additional concrete testing, at least 19 other change directives issued by the airport also remain unresolved at this time, ranging from restroom upgrades to material finishes and altered technical specifications to power and cable needs.

Currently, the DIA and Great Hall team are “currently assessing and seeking good faith resolutions” in regard to its disagreements and are scheduled to engage in mediation to keep the project moving forward.

Both the DIA and Great Hall Partners have declined to comment or release documents outlining the most recent cost projections at this time.