Last week (June 12), Michigan House Republicans announced a budget plan that prohibits the Michigan Department of Transportation from using taxpayer money for the construction of the Gordie Howe International Bridge, regardless of Canada’s claim to reimburse the state for all relevant expenses.

According to The Detroit News, if passed, the provision would completely stop work on the bridge from moving forward.

The Gordie Howe International Bridge has been in the planning stages for more than a decade, having first been proposed in 2004. In 2012, former Michigan Gov. Rick Snyder worked out a deal with Canada to construct a new bridge that would provide an additional crossing between Detroit and Windsor. By 2013, President Barack Obama gave federal approval for the project.

In November 2016, the Windsor-Detroit Bridge Authority announced it had issued a request for proposals to three teams that had been chosen through an earlier request-for-qualifications process for the bridge’s design, construction, financing, operation and maintenance. The RFP process was expected to take 18 months. 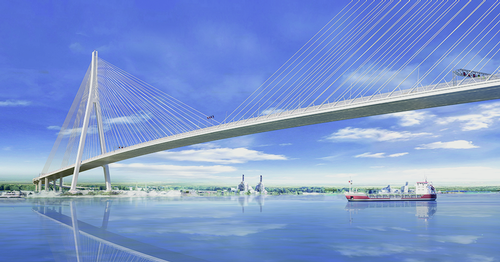 Courtesy of Windsor-Detroit Bridge Authority
Last week, Michigan House Republicans announced a budget plan that prohibits the Michigan Department of Transportation from using taxpayer money for the construction of the Gordie Howe International Bridge, regardless of Canada’s claim to reimburse the state for all relevant expenses.

However, a few months following the announcement, six companies owned by the Moroun family, owners of the Ambassador Bridge (the busiest border crossing between the U.S. and Canada in terms of trade volume), tried to sue Snyder alleging that he acted illegally when he worked out a deal with the Canadian government to fund construction on the American side of the bridge, without the approval of the Michigan legislature, in order to halt construction.

This wasn’t the first time Manuel “Matty” Moroun tried to block the Gordie Howe Bridge: Earlier that same year, a federal judge dismissed a suit the Detroit International Bridge Co. filed arguing that the federal approval of the bridge was unconstitutional. The same judge ruled that several other arguments Moroun made against the construction were invalid in 2015 as well.

In May 2017, the WDBA announced that it issued $86 million in contracts related to Phase Two of preparation work at the Canadian port of entry for the bridge.

By October, Wayne County Circuit Court Chief Judge Robert Colombo Jr. determined that an agreement made by the state governor with the Canadian government to construct another international bridge was valid, despite the Ambassador owner’s claims to the contrary.

That November, Chief Judge Judith W. Rogers also ruled that Michigan’s intermediate state appeals court was not wrong in honoring the international deal. Moroun’s lawyers had initially argued that state law prohibited Michigan from making the deal with Canada, but Rogers noted in her opinion that none of the challenges presented were persuasive. By January, Canadian officials labeled the Gordie Howe International Bridge the country's foremost infrastructure priority; officials expect to sign a contract with the selected bidder by September.

In mid-May 2018, Moroun lost another lawsuit, which was rejected by a three-judge panel upholding a prior Court of Claims ruling that several companies owned by Moroun missed a one-year statute of limitations for claims against the state of Michigan by failing to provide a timely notice of intent. And in June, Moroun released a television commercial asking President Donald J. Trump to intervene on the matter and revoke former President Obama’s presidential permit.

The following month, WDBA announced that international consortium Bridging North America is its "preferred proponent" to design and build the Gordie Howe International Bridge, and that the group's design calls for the longest cable-stayed main span in North America.

Toronto-based construction firm Aecon Group re-entered the Bridging North America consortium in August, months after withdrawing amid concerns about a planned sale to a state-owned company in China.

By October, a $4.4 billion contract for the Gordie Howe Bridge was finalized and a competition date was slated for 2024. Construction officially broke ground on Oct. 5, 2018 with a ceremony attended by both Snyder and Canadian Prime Minister Justin Trudeau.

Most recently, in January, the Michigan Supreme Court blocked a May appeal from Moroun, which looked to stop the state’s Department of Transportation from buying land owned by the Morouns’ and other companies—land that would be needed for the Gordie Howe International Bridge.

Earlier this month, in an attempt to avoid a 45-cent-per-gallon increase in Michigan’s fuel tax on gasoline—a plan proposed to accumulate money to fix the state’s roads—House Republicans began to consider a proposal to sell the Blue Water Bridge, four state-owned airports, eight welcome centers and a rail line that runs between Grayling and Gaylord.

However, many were opposed to this idea, questioning how much the state could really make from the bridge when it is still $90 million in debt services, with a final payment slated for 2037.

Democrats also voted against the proposal from the standpoint that enough money wouldn’t be made from state-owned sales and that a fuel tax increase would still be required, which would lead to a gouge in mass transit and passenger rail lines.

Additionally, Bridge Magazine announced that House Republications have suggested another proposal: In the same effort to phase out the state’s sales tax on paid gasoline, representatives suggested replacing this idea with a higher state gas tax, which would be dedicated to fixing roads.

According to the article, the plan hasn’t been formally introduced into legislation but would increase the state’s 26.3-cent-per-gallon gas tax by the same amount that the sales tax is reduced, ultimately having no increase in what drivers pay at the pump. This proposal would raise $542.5 million in 2020, still below the necessary $2.5 billion.

Regarding the Gordie Howe Bridge project, Canada has already repaid MDOT $83.5 million for work, land acquisition activities, consultant fees and compensation. And as of December, the state has also acquired 97.8% of all land necessary for the project, according to The Detroit News.

However, Rep. Matt Maddock, R-Milford, questioned, “Why should we continue to be a credit card for Canada?” As much as Maddock is in support of the Howe bridge, he also believes Legislature should have additional oversight on the state’s spending, even if it is reimbursed.

“I think it’s a conversation we’ll just continue forward as we work through the budget process,” said House Appropriations Chairman Shane Hernandez, R-Port Huron. “A lot of that boilerplate language is … flexible as we go throughout the process.”

Previously, a separate budget proposal was approved by the state Senate, which didn’t include any new state restrictions on the bridge project.

Yet, according to reports, the Morouns, who have continued to fight against the bridge’s construction, are also major political donors, having contributed more that $400,000 to state lawmakers, candidates and political committees since 2017. According to state records, the family gave $5,000 to each of Hernandez’s and Maddock’s leadership accounts.

The new House GOP plan would create a $13.9 million “incentive challenge fund,” which transit agencies could access if they can ensure that 20% of its operations are funded by rider fares. Additionally, the plan calls for a $6.4 million cut in information technology spending by MDOT and $21.3 million in operational cuts for the department.

In the week following the proposed budget plan, officials and elected leaders from Michigan and Canada released details of community benefits tied to a commuter bridge. The plan—which is to be financed by Canada—will help foster the growth of small surrounding companies and encourage residents to apply for Gordie Howe International Bridge project-related jobs and training.

Both chambers will have to negotiate a final budget in the coming months.