In an attempt to avoid a 45-cent-per-gallon increase in Michigan’s fuel tax on gasoline—a plan proposed to accumulate money to fix the state’s roads—House Republicans are now considering a proposal to sell the Blue Water Bridge.

According to officials, the sale could potentially raise between $500-800 million.

Connecting both Interstate 94 and Interstate 69 with Highway 402 over the St. Clair River, the international bridge sits between Port Huron, Michigan, and Point Edward, Ontario.

The steel cantilever bridge consists of two spans, the first being built in 1937 by the American Bridge Company of New York, New York, for a joint cost of $4 million spilt equally between both sides.

The original main span is 871 feet long with a 6,178-foot structure length and carries three lanes of westbound traffic. Regarding the bridge’s approach spans, the American approach is 2,283 feet long, while the Canadian approach is 2,657 feet long, making the overall length of the bridge 6,463 feet. The original bridge officially opened in 1938 and was last renovated in 1999 for roughly $21.3 million (for the Michigan half). 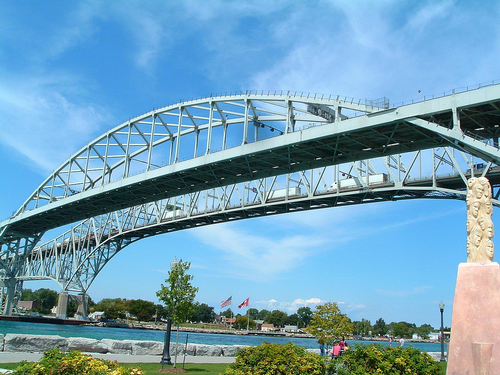 Qviri, CC-BY-SA-3.0, via Wikimedia Commons
Connecting both Interstate 94 and Interstate 69 with Highway 402 over the St. Clair River, the international bridge sits between Port Huron, Michigan, and Point Edward, Ontario.

Construction for the second span of the bridge began in 1995 and the structure was opened in 1997, also carrying three lanes of traffic. The state of Michigan paid $41.3 million for its half of the modern bridge.

According to the Federal Bridge Corporation, 14,000 vehicles cross the bridge on an average day, while roughly 20,000 cross on a busier day with at least 6,000 being trucks. The Michigan Department of Transportation estimates that 14.5 million vehicles will have crossed the Blue Water Bridge by 2021.

Previously, in March, Gov. Gretchen Whitmer proposed a 45-cent-per-gallon fuel tax increase. If passed, the plan would allot $2.35 billion in net revenue for the state’s roads and would increase the current 26-cent fuel tax by 45 cents by October 2020. However, this plan was rejected by GOP lawmakers without any suggestion of their own plan.

To consider another option, Rep. Matt Maddock, R-Milford, chairman of the House Appropriations Subcommittee on Transportation, suggested selling several state-owned transportation assets (including the Blue Water Bridge), state-owned airports and even freeway welcome centers. Although, the bridge itself is still jointly owned by the Michigan Department of Transportation and Canada’s Federal Bridge Corporation Limited.

A solicitation for proposal for the sale of the bridge is already in the subcommittee’s budget and according to the Detroit Free Press, a call for proposals is also included in the House version of the state’s 2020 budget, but it is unclear if the proposal will be included in the Senate’s version.

According to Democratic vice chair of the House Fiscal Agency Governing Committee Rep. Jon Hoadley, D-Kalamazoo, the sale wouldn’t raise the necessary $2.5 billion the state needs every year for the next 10 years to make the appropriate road fixes and would be a “piece meal solution.”

While state Rep. Shane Hernandez, R-Port Huron, explained in a written statement to the Times Herald, “The language in the proposed subcommittee budget is a way to collect ideas and gather information as to the value of the state’s assets. No decisions are being made right now. This language is part of the first step in a budget process.”

Although Jeff Cranson, spokesperson for MDOT, declined to comment on the selling plan to the Detroit Free Press, he stated that the state still owes just under $90 million on the second span of the bridge. A final payment has been slated for 2037.

Additionally, at the end of last week, Bridge Magazine announced that House Republications have suggested another proposal: In the same effort to phase out the state’s sales tax on paid gasoline, representatives suggest replacing this idea with a higher state gas tax which would be dedicated to fixing roads.

According to the article, the plan hasn’t been formally introduced into legislation but would increase the state’s 26.3-cent-per-gallon gas tax by the same amount that the sales tax is reduced, ultimately having no increase in what drivers pay at the pump. This proposal would raise $542.5 million in 2020, still below the necessary $2.5 billion.

Already, the Senate has chosen to pass its transportation budget, which ultimately speeds up the phase-in of $600 million in diverted income dollars for roads. The funding package is part of a 2015 legislation that uses $132 million in one-time funding.

As for the proposals submitted for gas tax or selling the Blue Water Bridge, House and Senate budgets will continue to negotiate in order to come up with a final compromise which will then move to the governor’s office.

According to Fox 2, Senate Majority Leader Mike Shirkey of Clarklake suggests that a budget could be finished by July 1 with the passing of a supplemental spending legislation in September if broader road agreements are reached.