The expansion was approved by the city council back in April 2018, with the biggest piece of the puzzle being that the 55-year-old Terminal 2 will be torn down to make room for a new global terminal with wider concourses and gates that could accommodate larger aircraft intended for international flights. Terminals 1, 3 and 5 are set to be renovated, with two new satellite concourses to be built and connected to the new global terminal via an underground pedestrian tunnel. 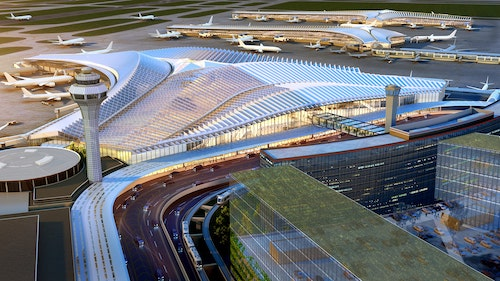 Former Chicago Mayor Rahm Emanuel’s office said that the project “will create more than 60,000 construction jobs for the next eight years, and tens of thousands of new permanent jobs with the airport, airlines, tourism and supporting industries to support a larger, modern airport complex in the next decade.”

Emanuel launched a Request for Qualifications for the project to architects all over the world last June.

The city received bids from a dozen groups. (Those that did not make the shortlist included notable names such as Bjarke Ingels Group, Perkins + Will, HOK and Grimshaw Architects.)

Designs from the five were revealed to the public in January, and in March, Emanuel announced that the design from Studio ORD was chosen for the task and began the contract negotiations with the joint venture, which includes Corgan Associates Inc., Milhouse Engineering and Construction Inc., STL Architects Inc., Solomon Cordwell Buenz & Associates Inc. and Studio Gang Architects Ltd.

Mayor Lori Lightfoot, who was sworn in on May 20, inked the deal with Studio ORD, led by Chicago architects Jeanne Gang, last week.

The contract is worth about $160 million.

According to the Chicago Sun-Times, each must set aside 26% of all contracts for companies owned by minorities and 6% for firms controlled by women.

City officials have also indicated that they’re close to selecting the teams responsible for designing the two satellite concourses that will be built in line with Studio ORD’s design.