Issues continue to plague the Washington, D.C., Silver Line project, with Capital Rail Constructors, the contractor responsible for building the second phase of the endeavor, reporting that concrete pedestals supporting a station are cracking. Test trains are also operating on tracks between Wiehle-Reston East and Ashburn, Virginia, but a date as to when these trains will actually carry passengers has yet to be determined.

The Dulles Airport station’s concrete pedestals, intended to anchor the station’s first-level glass walls, as well as the glass windscreens to be installed on the second level, were reportedly built without appropriate internal reinforcement.

Back in May 2018, the Silver Line project was rocked by reports that employees of subcontractor Universal Concrete Products, of Stowe, Pennsylvania, falsified concrete test reports, certifying panels that were not made to specification. Andrew Nolan, who served as QC manager at the firm and allegedly oversaw the cooking of the books, pleaded guilty in August to one count of conspiracy to commit wire fraud, and agreed to cooperate with investigators.

The QC team at UCP allegedly changed values on reports indicating the air and water content of the concrete mixtures, and sourced aggregate from a different quarry than it had originally proposed, potentially leaving the door open to the alkali-silica reaction, in which aggregate reacts with cement paste, often creating cracking and spalling. 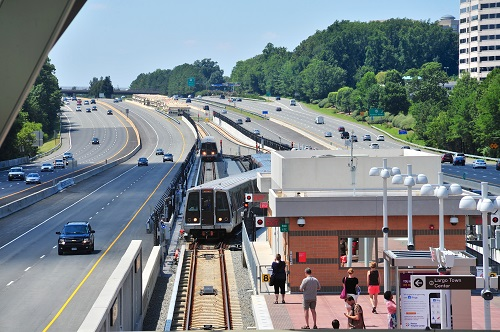 Ryan Stavely, CC-BY-SA-2.0, via Wikimedia Commons
Issues continue to plague the Washington, D.C. Silver Line project, with Capital Rail Constructors, the contractor responsible for building the second phase of the endeavor, reporting that concrete pedestals supporting a station are cracking. Test trains are also operating on tracks between Wiehle-Reston East and Ashburn, Virginia, but a date as to when these trains will actually carry passengers has yet to be determined.

The whistleblower lawsuit, filed in 2016 by former UCP quality-control employee Nathan Davidheiser, was joined in 2018 by the federal government and commonwealth of Virginia. In addition to the allegations leveled against Nolan, the suit states that company executives ignored internal complaints about the fraudulent practice and in some cases demoted or even terminated employees who attempted to put a stop to the false reports. At the end of September, the Washington Metropolitan Area Transit Authority’s Office of the Inspector General announced it would take over the investigation into quality-control issues.

On top of the lawsuit, in the beginning of October, reports indicated that a garage being built as part of the second phase of the project was sinking.

In January 2019, alleged faulty concrete railroad ties came to light; Capital Rail Constructors, a joint venture composed of Clark Construction and Kiewit Infrastructure, had discovered that roughly 400 railroad ties were up to half an inch higher in the center than on the sides.

And in February, the first tests were slated to take place with a two-car train, which was pushed by an older locomotive, but only made it roughly 1,000 feet before encountering issues with the rail—the whole trip is 11 miles. In addition to this set-back, 300 cracks were also found to have formed in buildings that are meant to be used for railcar maintenance for an extension.

As of late March, of the three concrete issues located between Wiehle-Reton and Ashburn, only one had an approved plan to address more than 1,000 faulty framing panels. Additionally, the 451 heavy concrete rail ties installed where trains may switch from one track to another, have angled the rails outward, posing a significant safety risk.

Once CRC wraps up work, the Metropolitan Washington Airports Authority, the agency managing the project, will hand everything over to Metro. CRC could face penalties if the project is not completed by August.

According to The Washington Post, the project is already 13 months behind schedule. CRC is also responsible for paying for any pedestal repairs.

Project executive director Charles Stark noted that the cracks were initially discovered in April 2018, but the extent of the damage wasn’t uncovered until November, when the concrete was removed for repairs. Records obtained by the Post indicate that these issues may at least partially be attributed to design and instructions received by workers as being confusing.

A fix for the rail tie issue, on the other hand, originally discovered in September, has yet to be found. Keith Couch, project director for the CRC, noted that officials are still looking for a solution, going on to emphasize that since the issue was found before the project was completed, the company’s quality control measures were working. Criticisms have been leveled at these measures, however.

Metro and the Airports Authority now maintain that the ties need to be replaced, which will likely cause further delays.

Spraying work on the concrete panels, which were previously at issue, recently resumed, with the completion date slated for late June. Baseline moisture tests for those panels are currently being reviewed.