The United Kingdom's Ministry of Housing recently announced that combustible Grenfell Tower-style cladding on private residential high-rise blocks will be replaced at the cost of roughly 200 million pounds ($258.9 million). The government plans to foot the bill.

The funds will be used to remove the aluminum composite materials from some 170 privately owned residential buildings.

After the fire, which resulted in the death of 72 people, a criminal investigation was opened by the Metropolitan Police Service. 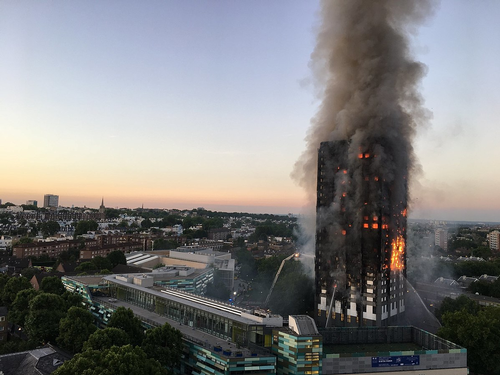 Natalie Oxford, CC-BY-4.0, via Wikimedia Commons
The Ministry of Housing recently announced that combustible Grenfell Tower-style cladding on private residential high-rise blocks will be replaced at the cost of roughly 200 million pounds ($258.9 million).

According to Detective Superintendent Fiona McCormack at the time, “Preliminary tests show the insulation samples collected from Grenfell Tower combusted soon after the tests started. The initial test on the cladding tiles also failed the safety tests.”

In response to these results, police declared that manslaughter charges would be considered.

The following month, Prime Minister Theresa May pledged $517.9 million to cover the replacement of unsafe cladding for social housing blocks. Privately owned towers were left to figure out the replacements on their own, however.

As a result, many property owners passed the renovation charges to residents, which in some cases cost them thousands of dollars to make their homes safe again.

The ban limits the use of materials to products that achieve a European fire-resistance rating of Class A1 or A2. The legislation also cleared up what exactly the government meant by an “exterior wall.”

By March 2019, the police continuing investigations into the blaze stated that it was likely that no charges would be pressed until the public inquiry was complete in 2021.

Almost two years after the Grenfell Tower fire, the government proclaimed it would be funding the replacement of the remaining combustible cladding on over 170 privately owned residential buildings.

It’s first real hope to people in dangerous blocks that the nightmare they have been living for nearly two years will be over soon.

"Today I can confirm we will now be fully funding the replacement of cladding on high-rise private residential buildings," said May.

"We've seen a number of private building owners doing the right thing and taking responsibility, but unfortunately too many are continuing to pass on the costs of removal and replacement to leaseholders."

As an additional response to building owners who are still trying to push the bill on leaseholders or failing to make the changes to property exteriors all together, Brokenshire urges people to call time on the use of “delay tactics.”

“If these reckless building owners won't act, the government will,” Brokenshire said.

Welcoming the news, Grenfell United—a group of survivors and the bereaved—felt that the funding offered hope to people still living in dangerous blocks. The U.K. Cladding Action Group—a coalition of private lease holders­ who had been facing bills over $103,000 and in March, launched a campaign to secure funding—also welcomed the proclamation.

However, UKCAG stressed that the funding wouldn’t cover the removal of all the cladding or the costs of other fire protection measures, including 24-hour patrols.

Currently, building owners have three months to claim the available funds, with the condition that they continue to take “reasonable steps” to recover cost from those responsible for the cladding itself.

Remediation quotes have been reported to range between $5.1 and $7.8 million, while the available funding averages about $1.5 million per building.