$1.4B Pattullo Bridge Closer to Groundbreaking

The British Columbia Ministry of Environment and Climate Change Strategy and the BC Ministry of Municipal Affairs and Housing has recently granted an environmental assessment certificate to the Ministry of Transportation for the $1.4 billion Pattullo Bridge replacement project.

The awarded certificate follows the environmental assessment office’s recommendation of having the project move forward.

The Pattullo Bridge is an 80-year-old structure that was opened in 1937. The through arch bridge is located between the Port Mann and Alex Fraser/Queensborough bridges, providing a direct connection between New Westminster and Surrey. 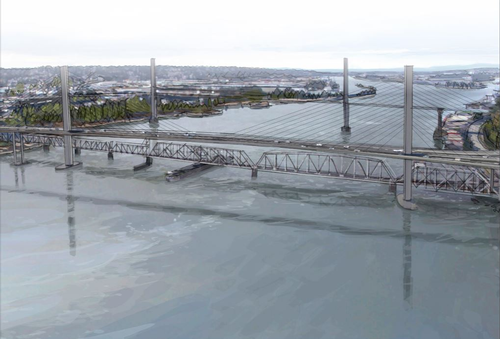 Under the bridge, the shipway is measured 438 wide and 150 above the water. At the time, the total cost of the bridge project was $4 million, which included the contract, cement, right-of-way purchases, realignment and the resurfacing of highways and approaches.

In a 2007 report to TransLink, it was determined that the bridge was becoming vulnerable to collapse, possible from something as simple as a moderate earthquake or ship collision.

Today, the bridge still sees roughly 68,000 vehicles daily, but now, even regular maintenance practices are no longer cost effective to keep the infrastructure in use.

Slated to be built only 100 meters (328 feet) upstream from the current structure, a new-four lane bridge will be the official replacement of the Pattullo Bridge. The plans for the new structure include wider lanes (the potential to be six lanes wide), separated cycling and pedestrian paths on both sides of the bridge with traffic barriers as well as a center barrier separating the four vehicular traffic lanes.

Although it is not an official announcement, renderings of the new bridge reveal that the structure may be designed with cable-stays. New ramps are also included in the project’s developing specifications and will connect Highway 17 and East Columbia Street.

“The new bridge will make it easier and safer for people to cross the Fraser River whether driving, cycling or walking,” Transportation Minister Claire Trevena said in a statement.

“The environmental assessment certificate is a significant step for the project and will set out the conditions of how the new bridge will be designed and built. As we move ahead to the next stage, it is important to continue meaningful consultation and engagement with Indigenous groups and local communities.”

Additionally, the awarded certificate legally binds the project to 20 conditions to uphold. Those conditions include the assurance of minimal environmental impacts on surrounding wildlife and fish—including the area’s marine and fisheries. Because of these conditions, the construction and demolition processes are required to issue environmental management plans. In order to write up these plans, further conditions listed require that the development team receive consultation from Indigenous groups—included in the monitoring plan­.

Already the EAO has consulted with 14 Indigenous groups when writing the initial report.

“Having considered the Environmental Assessment Office’s Assessment Report and the recommendation of the executive director of the EAO to issue a certificate, the ministers are confident that construction, demolition and operational activities would be conducted in a way that ensures that no significant adverse effects are likely to occur,” reads the release.

The Ministry of Transportation will still be responsible for obtaining other federal, provincial, local, project and environmental review permits from the Vancouver Fraser Port Authority, however.

While the providence has yet to select a contractor for the bridge replacement project, work is set to be built through a new controversial community benefits agreement, which will prioritize First Nations, local, women and apprentice workers, in addition to requiring all contractors to use unions.

Construction is expected to begin this year with the new bridge opening in 2023 and removal of the existing bridge following in 2024.