On Monday (April 15) evening, flames engulfed the more than 850-year-old Notre Dame Cathedral in Paris, destroying the spire and nearly two-thirds of the roof.

With the help of about 500 firefighters battling the blaze, the fire was brought under control by the early hours of Tuesday morning, five hours after the outbreak. Officials recently stated that no fatalities took place and only one firefighter was reported seriously injured.

Though the Paris prosecutor’s office has opened an investigation, no official cause has been released at this time, however, police are saying that the fire appeared to have begun accidentally and that the cause may be linked to the current renovation work.

Weighing in the on the restoration-relation possibility, heritage fire safety expert Stewart Kidd said, “If I see scaffolding being erected on a heritage building my heart sinks because I know it has got a strong probability of a fire.”

Kidd notes that all construction sites are inherently dangerous places, but the danger was is much higher in a heritage building.

Laurent Nuñez, a junior interior minister, said that the main concern of French authorities at this time would be identifying weaknesses in the structure. Police and fire services would also be spending the next 48 hours assessing the “security and safety” of the historic monument.

To complete this part of the investigation, residents of five buildings around the north transept of the cathedral have since been evacuated for the inquiry period.

“We have identified some vulnerabilities in the structure … notably in the vault and the north transept pinion that needs securing,” Nunez said.

In addition, most of “the forest’s”—so named for the oak used in the cathedral's roof—oak beams have been burned, some concrete vaulting has collapsed and one of three main holes have formed where the 93-meter (305-foot) spire once stood. Various stained-glass windows have also been destroyed.

While trying to control the blaze, many other firefighters were able to help remove priceless artworks and religious relics from the medieval structure. Photos released from inside the cathedral after the fire ceased suggest that Notre Dame’s 1730s grand organ, projecting 8,000 pipes, was also spared.

Having been removed only a few days prior for restoration, sixteen copper statutes depicting 12 apostles and four evangelists are also safe. However, relics attached to the spire itself are believed to be lost along with the Eugène Viollet-le-Duc-designed spire.

Now, looking at the heart of the structural damage, safety also becomes a top priority. In the event of a fire-damaged building, there is still much at risk regarding localized collapses and falling debris.

According to architectural historian and broadcaster Jonathon Folye, “It's already a wet building because of the water that's been pumped on it, so they're going to need to provide some kind of cover from the elements.

“The roof's job was to discharge thousands of tons of water, so where's that going to go? Every time it rains it's going to cause damage at this point, so it's against a war of attrition now."

Foyle also added that high temperatures can change the chemical nature of limestone—much of what the cathedral is made from—resulting in a potential weakening of the structure. Furthermore, when cold water was applied to the hot stone in firefighters’ inevitable efforts, thermal shock could have occurred, resulting in cracks in the stonework.

To fully understand the damages and how to go about repairing them, French authorities will be pulling archeologists to study the design and materials used in the original construction of the cathedral. Notre Dame has virtually no building records, only knowing that construction began in 1163 and finished around 1240, all without building accounts.

Although, in addition to the 6-million-euro ($6.8 million) renovation that was occurring prior to the event, the Ministry of Culture was also supplying Notre Dame 2 million euros per year just for upkeep. Unfortunately, according to staff, this was only enough to cover basic repairs.

While investigations continue to take place and plans to rebuild commence, President Emmanuel Macron has already vowed that the cathedral would be rebuilt.

“This is the place where we have lived all of our great moments, the epicenter of our lives,” he said. “It is the cathedral of all the French." 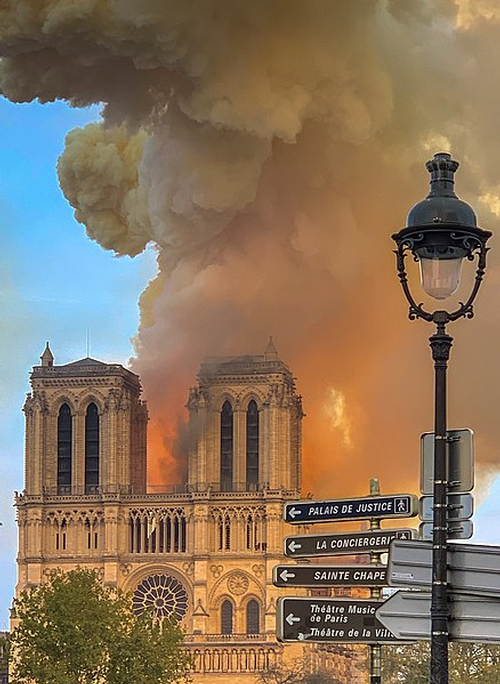 Milliped, CC-BY-SA-4.0, via Wikimedia Commons
While investigations continue to take place and plans to rebuild commence, President Emmanuel Macron has already vowed that the cathedral would be rebuilt.

An icon of medieval Gothic architecture, the landmark not only serves Paris, but the world with an estimated 30,000 visitors a day and around 13 million people a year.

Thousands of Parisians and onlookers gathered to watch in fear, awe and sadness as the flames ate away at their historic landmark. Pope Francis has since offered his prayers that Notre Dame, the “architectural gem of a collective memory”, will once again be a shrine to the Catholic faith, a symbol of the French nation and a spiritual and architectural gift to humanity.

Taking the steps to fulfill his promise, Macron has since launched an international fundraising campaign which has already raised almost 700 million euros. LVMH and the Arnault family, and L’Oreal and the Bettencourt family lead the top donations, each pledging 200 million euros.

Those interested in contributing to the international online fundraising campaign may do so here.

Additional donations will also be received by the National Collection of Notre-Dame of Paris.