Project organizers for the Hudson Tunnel—a new rail tunnel slated to run between New York and New Jersey— are reviewing their options after key federal funding for the $13 billion project has become unavailable.

Due to this denial of funding, focus has been turned to the idea of rehabilitating the existing 108-year-old tube instead.

About the Hudson Tunnels

Part of Amtrak’s massive Gateway Program, developed in 2017 to overhaul parts of New York’s and New Jersey’s transportation infrastructure, included plans to build the Hudson Tunnel from 2019 to 2026. 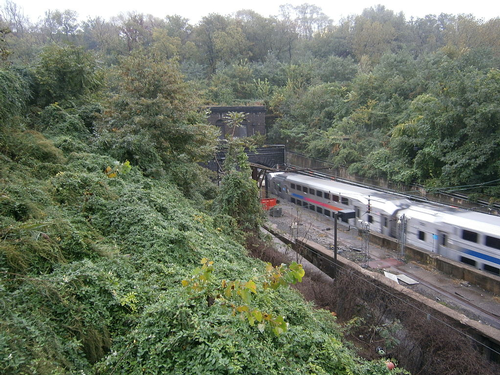 Hudconia, CC-BY-SA-3.0, via Wikimedia Commons
Project organizers for the Hudson Tunnel—a new rail tunnel slated to run between New York and New Jersey— are reviewing their options after key federal funding for the $13 billion project has become unavailable.

The new tunnel was thought as one of the most important transportation projects in the nation, in part because it would allow for the reconstruction of the North River Tunnel. Completed in 1910, the North River Tunnel was already well into its prime when in 2012, Super Storm Sandy inundated it with millions of gallons of salt water, which left behind corrosive chlorides.

According to an engineering report from 2014, claimed the Amtrak tunnels would require $689 million to repair the corrosion and cracking caused by Superstorm Sandy. The 57-page report, "Structural Assessment of the Amtrak Under River Tunnels in NYC Inundated by Super Storm Sandy," found that chlorides and sulfates caused, and were continuing to cause, significant damage to key tunnel components.

In addition, the report recommended a phased process to take individual tubes out of service for extended periods to perform repair work. Ultimately underscoring the urgency to advance the Gateway Program.

To investigate the possibilities of the Amtrak Gateway Program, among other projects in the country, the U.S. Government Accountability Office reviewed the cost of mass-transit infrastructure projects in 2018. As part of its investigation, the GAO oversaw factors including how contracts are written and carried out, and whether regulatory barriers are driving up costs on transit projects, particularly in New York City.

The investigation arose as Congress and President Donald J. Trump attempted to move forward on an infrastructure funding plan that would include $200 billion in spending to spur $1.5 trillion in state, local and private infrastructure investment over the next 10 years.

The @hudsontunnel project is the most urgent infrastructure project in America because THERE IS NO PLAN B. No other mode can absorb 200,000 displaced daily riders. We need to #BuildGateway now to secure our economic future. Via @businesshttps://t.co/Aj9BB6wvtY

In response to the matter at hand, Gateway Development Corp. board members have recruited experts from Columbia and Cornell universities, who had provided prior advisement to New York Gov. Andrew Cuomo during a similar project involving the L subway line. The board also plans to stay committed to moving forward with necessary pre-construction design and engineering work, as they continue attempts to reach a funding agreement with the federal government.

Even after significant saltwater damage, rehabilitation attempts during overnight and weekend hours, deterioration still stands as the biggest issue for the existing tubes.

Though still managing to transport more than 400 trains and 200,000 passengers each day, Amtrak Chairman Tony Coscia said, “In the interim, we have to deal with the reality that we may have to consider some other options that are available to ensure the tunnels are durable for as long as possible.”

Previously approved by the Metropolitan Transportation Authority were plans to remove damaged concrete from the Canarsie tunnel that lines and encases power cables—followed by replacing the cables and rebuilding the concrete walls.

Looking at new ideas, another plan was brought to the table that advises the installation of cables on racks that would run along the inside of the tunnels, abandoning the old cables where they are. The surrounding concrete would also be rehabilitated and encased with a protective fiber-reinforced polymer.

However, Chairman Jerry Zaro from the Gateway Development Corp. doesn’t believe one size will fit all for this project.

“We have a 108-year-old tunnel and the cables are one issue, but we have many others. Racking sounds interesting, and it definitely warrants exploration and we are doing that, frankly, as we speak.”

While debates on how the repairs will be carried out continue, urban research and advocacy organization, Reginal Plan Association (New York), noted that cables used in the Canarsie tunnels run on 625 volts, while Hudson River’s use 12,000 volts, making them much larger and requiring more protection.